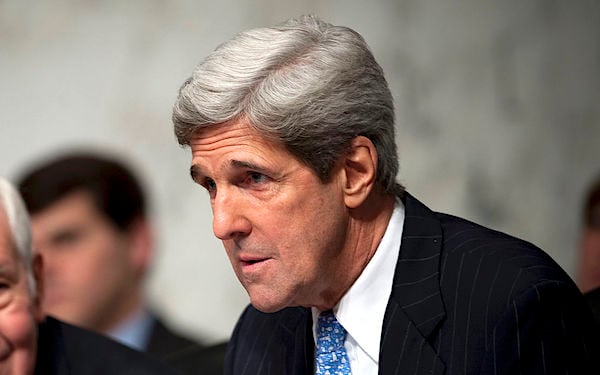 But the Iranian foreign minister, Javad Zarif, is on record saying he first learned of Israel's actions from Kerry, according to an independent translation commissioned by the Washington Free Beacon of a leaked audio recording.

The New York Times reported Sunday that Zarif said Kerry told him Israel launched 200 airstrikes against Iranian interests in Syria. The Times report of the recording obtained by Iran International, a Persian news channel, said Zarif was "astonished" by the information. But the Times provided no further details.

Kerry with Hossein Fereydoun and Mohammad Javad Zarif during the announcement of the Joint Comprehensive Plan of Action, July 14, 2015 (State Department photo)

"Kerry told me that Israel had launched 200 airstrikes against [Iran]," said Zarif, according to the translation commissioned by the Free Beacon.

On Monday, State Department spokesman Ned Price was asked  during a press briefing about Zarif's claim.

"If you go back and look at press reporting from the time, this certainly was not secret, and governments that were involved were speaking to this publicly on the record," he said.

On Tuesday, Secretary of State Antony Blinken accused Republicans of trying to "play politics with this." He said the strikes "were all reported in the press at the time, so it is utter nonsense."

"I can tell you that this story and these allegations are unequivocally false," he wrote. "This never happened - either when I was Secretary of State or since."

Former Israeli ambassador to the United States and former Knesset member Michael Oren said he didn’t know whether Zarif was telling the truth. But it was well known during the negotiations for the Iran nuclear deal that Kerry and Zarif had a close relationship, he said, which was troubling to Israel. 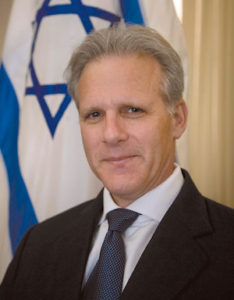 "He made no attempts to disguise that," said Oren in a report by the Jewish News Syndicate.

"And for Israelis, this was very disturbing. This was the representative of a government that was sworn to destroy us — actively seeking to destroy us. It wasn’t passive. It wasn’t just rhetoric," said Oren.

"If they won't, Republican members should send a criminal referral to the Department of Justice ... compelling a full investigation," he wrote on Twitter.

Sen. Ted Cruz, R-Texas, said that if the audio "is verified, it would signal catastrophic and disqualifying recklessness by Envoy Kerry to Foreign Minister Zarif that endangered the safety of Americans and our allies."

On Thursday, 19 Republican senators called on President Biden to launch an investigation into the matter, asking that Kerry be immediately removed from the National Security Council while the probe is underway.

On Wednesday, a group of House Republicans asked the State Department's acting inspector general to investigate Kerry's relationship with Iran.

The letter to Diana Shaw was signed by Missouri Rep. Ann Wagner, Kentucky Rep. Andy Barr and New York Rep. Lee Zeldin. The Congress members insisted there are many unanswered questions and they noted that Iran "poses an existential threat to Israel, the United States’ key ally in the Middle East, and it has repeatedly demonstrated its willingness to attack Israel directly, both through proxies and from its positions in Syria."

"Given the gravity of the security threat Iran poses to U.S. and Israeli interests, we respectfully ask that you fully investigate these allegations," the Congress members state.

Seth Lipsky of the New York Sun urged Congress to get Kerry to testify on the matter. He noted that the first time Kerry testified before the Foreign Relations Committee, 50 years ago, he "echoed Viet Cong emissaries he'd met with in Paris."

"So putting Mr. Kerry under oath on this matter would be a fitting coda to his career," Lipsky wrote.