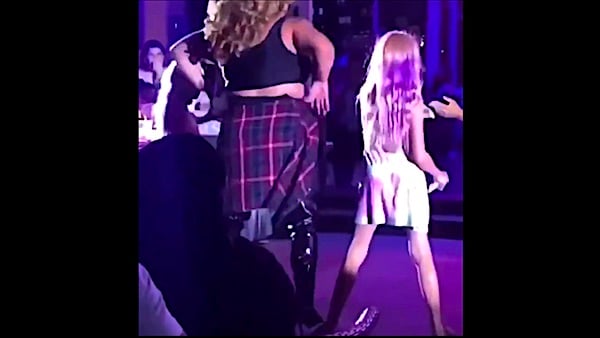 Two young girls receive cash as they strut on stage with a drag queen at a nightclub. (Video screenshot)

A viral video posted Monday on Twitter shows two young girls strutting on stage and receiving cash from the audience at a drag-queen show in Los Angeles.

In the video, a Twitter user who goes by Lindsay noted live from the scene that it was taking place at 11:40 p.m.

"Why in the hell do these people got these f***ing little-bitty a** kids at this f***ing drag show?” she asks.

Two young blonde girls are seen on the video being prompted by a drag queen to pose to music as they collect cash from audience members.

"Look at this sh**! They're f***ing throwing money at these little girls, got 'em picking up f***ing money off the floor like they're f***ing strippers and sh**," the woman says.

The Gateway Pundit website noted, "Children haven't been able to go to school because of Covid, but they can strut across a stage with drag queens at midnight."

The date of the show was unclear.

A Twitter user commented: "openly prostituting minors at a drag club. A new social low. Where are the #police? Where are child services? Where are our politicians? You created this mess, you FIX IT"