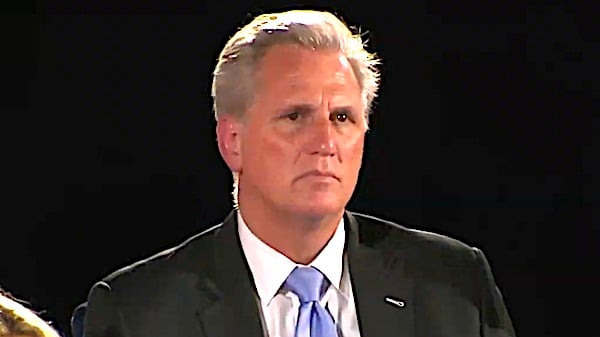 "The Bait – He promised to govern with bipartisanship. The Switch – He's governed as a socialist," McCarthy wrote on Twitter regarding his "Fox News Sunday" interview.

The Bait → He promised to govern with bipartisanship.
The Switch → He's governed as a socialist. pic.twitter.com/F9QTVrAEFz

The Washington Examiner noted the Biden administration's governing without any input from Republicans breaks a campaign promise.

The comments come as Biden seeks approval of a $2.3 trillion "infrastructure" bill that, Republicans charge, allots only a fraction to infrastructure while funding the Democratic Party agenda.

McCarthy said he has not "met with the president one time, nor had one conversation," despite Biden's campaign pledge of "unity."

"Less than 6% in the infrastructure goes to infrastructure," McCarthy said on Fox. "Republicans would be the first one that would work with him, but I think the very first thing we would need to do [is] define what infrastructure is: roads, bridges, airports, Broadcom? We would get this done."

"But I think when America found out that just 6% is going to the roads, that they’re not going to be built for more than a decade, that we spend more on subsidizing electric cars than roads, bridges, and airports in this bill, I don’t think that’s going to be popular," McCarthy said.