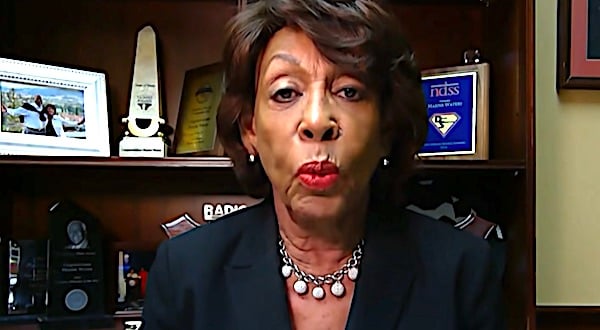 Judicial Watch has filed an ethics complaint against U.S. Rep. Maxine Waters, D-Calif., for urging protesters to "get more confrontational" if former Minneapolis police officer Derek Chauvin is not found guilty in the death of George Floyd.

It was widely understood as a message to jurors to find Chauvin guilty.

The Washington watchdog contends Waters "encouraged violence," which conflicts with House ethics rules that require members to conduct themselves "at all times in a manner that shall reflect creditably on the House."

The complaint to the Office of Congressional Ethics said: "Ms. Waters took an oath to uphold and defend the Constitution of the United States, which includes the rights accorded to Officer Chauvin to a fair and impartial trial by a jury of his peers and to due process. Ms. Waters’ inflammatory comments that pressure the jury, while encouraging rioters already engaged in rampant destruction of property and attacks on police officers, to 'get more confrontational' are irresponsible and dangerous incitement by a Member of Congress."

The complaint continued: "Ms. Waters’ conduct surely does not reflect creditably on the House. By encouraging violence in response to a 'guilty' jury verdict, she seeks to undermine the Constitution’s guarantees and protections, and fosters the breakdown of civil society. Such dangerous and reckless rhetoric demands investigation.

"More disturbingly still, this behavior by Rep. Waters represents a pattern of conduct. In June 2018, Ms. Waters exhorted protesters to form 'crowds' to 'push back' on President Trump’s cabinet members, saying, 'If you see anybody from that Cabinet in a restaurant, in a department store, at a gasoline station, you get out and you create a crowd and you push back on them! And you tell them that they are not welcome, anymore, anywhere.'"

Judicial Watch President Tom Fitton said, "Rep. Maxine Waters not only incited violence, she is also attempting to subvert the legal system by intimidating the jury in the trial of Derek Chauvin."

Fox News reported it has been told that "rank-and-file Democrats found what Waters said revolting."

The report said their "disgust" was "further metastasized" after the judge in the Chauvin case, Peter Cahill, criticized Waters from the bench, describing her remarks as "abhorrent" and "disrespectful to the rule of law."

He said Waters' statements may have given the defense counsel "something on appeal that may result in this whole trial being overturned."

Fox News explained: "With such a narrow majority, Democrats can only lose two votes on their side. Fox is told that some Democrats could in fact support what one lawmaker termed a 'reasonably worded' censure resolution to rebuke Waters. Plus, voting to punish Waters may well be good politics for some battleground district Democrats."

Attorney Alan Dershowitz said the judge should have granted a mistrial because of Waters' statements.

"Well, first of all the judge should have granted a motion for mistrial based on the efforts of Congresswoman Waters to influence the jury," he told Newsmax's Grant Stinchfield. "Her message was clearly intended to get to the jury. If you acquit or you find the charge less than murder we will burn down your building, we will burn down your businesses. We will attack you. We will do what happened to the witness, blood on their door."

He called it an "attempt to intimidate the jury."

"It’s borrowed precisely from the Ku Klux Klan of the 1930s," he said.