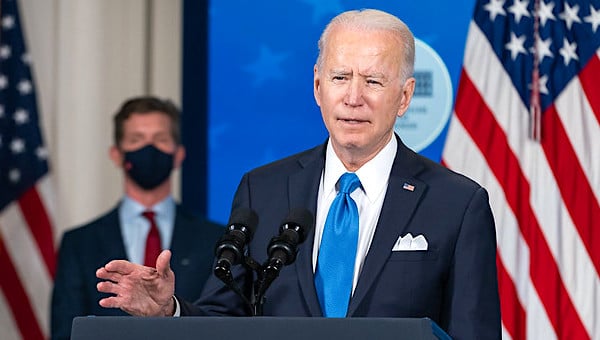 But the president apparently had redefined "unity," as former CBS News reporter Bernard Goldberg explained at the Hill.

"He said he would bring moderation to the presidency and that he would unite the country. So far, he has done the opposite. Instead of bringing Americans closer together, he’s doing a pretty good job of driving us apart," Goldberg wrote.

For example, Goldberg explained, Biden has taken no blame for the crisis on the southern border, instead blaming Trump.

And he's called state officials who want to end their mask mandates "Neanderthals."

Biden pushed through Congress $2 trillion in spending on mostly Democratic policies without a single Republican vote.

And he bashed Georgia's election-integrity law as "Jim Crow on steroids."

"In his own seemingly friendly way, Joe Biden sold the nation a bunch of malarkey with all his talk of unity and moderation," Goldberg said.

Now, having redefined "unity," Biden is intent on redefining "bipartisan," claiming to have bipartisan support for legislation that has been polarizing in Washington, reports the Washington Post.

Senior Biden adviser Anita Dunn claimed in the Post that if "you looked up ‘bipartisan’ in the dictionary, I think it would say support from Republicans and Democrats."

"It doesn’t say the Republicans have to be in Congress," she insisted.

Dunn once identified Chinese dictator Mao Zedong, one of the worst killers in world history, as one of her "favorite political philosophers."At the time, Dunn was serving as acting White House communications director under President Obama.

It was in 2009 when she said Mao and Mother Teresa were "the two people that I turn to most” when she needs to encourage others to break from the mold and blaze their own trail in life.

“In 1947, when Mao Zedong was being challenged within his own party on his plan to basically take China over … the nationalist Chinese held the cities, they had the army, they had the air force, they had everything on their side,” Dunn told the audience. “And people said how could you win? How could you do this?”

Regarding the term "bipartisan," Biden senior adviser Mike Donilon also said it really means "an agenda that unifies the country and appeals across the political spectrum."

Rahm Emanuel, the former mayor of Chicago and chief of staff to Obama, put it bluntly: “What’s become crystal clear is that Biden has redefined bipartisan.”

The Post report noted Transportation Secretary Pete Buttigieg "also signaled the administration may need to dispense with Republican votes in pursuit of a broad infrastructure package."

Buttigieg said: "The president really believes in a bipartisan approach, and it’s one of the reasons that I’m constantly having conversations with members of Congress on both sides of the aisle, gathering ideas. But the president also has a clear vision, and as he said, this has to get done. ... And we can’t let politics slow this down to where it doesn’t actually happen."

While Biden has been claiming "bipartisan" support from voters for his so-called infrastructure spending plan, polls indicate between 54% and 73% of Republicans oppose him.

There's also a new definition developing, among Democrats, for yet another word: "infrastructure."

House Speaker Nancy Pelosi, D-Calif., also emphasized the changing meanings of words, telling CBS News that infrastructure is "about education, about getting children healthily in school with separation, sanitation, ventilation. It's about investments in housing as well."