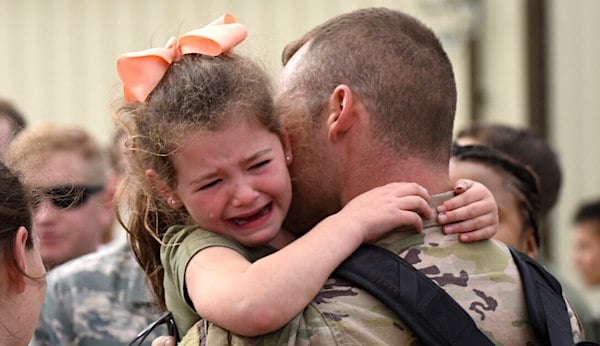 A 48th Fighter Wing airman embraces a family member at RAF Lakenheath, England, after returning from a deployment Oct. 11, 2017. F-15E Strike Eagles and airmen from the 492nd Fighter Squadron and supporting units across the 48th Fighter Wing returned from a six-month deployment to an undisclosed location in Southwest Asia. (U.S. Air Force photo by Airman 1st Class Eli Chevalier)

A new study in the British Medical Journal warns of "inappropriate" medical treatments for patients that could occur when doctors "deliberately confuse sex and gender."

The U.K.'s Christian Institute said the study from the University of St. Andrews in Scotland said "the significance of biological sex is being ignored by some medical practitioners, which can result in male or female-specific treatments being offered to the wrong people."

"In their study, published in the British Medical Journal, the researchers explained that in cases where transgender patients have been taking cross-sex hormones for a long period, they may respond differently to treatments for medical conditions," the institute said.

Dr. Margaret McCartney of the university's medical school said: "There are many instances of sex and gender being confused by the research community and society more broadly. Unless we identify and count categories correctly, we will end up with errors which serve all populations poorly, including minority populations."

Susan Bewley of King’s College London said medical care "requires an understanding of the difference between sex and gender categories; untangling them is crucial for safe, dignified, and effective healthcare of all groups."

"Avoidable harm may result when they are conflated — for example, if sex specific laboratory reference ranges are used for people whose gender is recorded but not their biological sex or hormone prescription," she said.

The Telegraph of London said the threat should not be underestimated, affirming that biological sex and gender are powerful risk factors for "virtually every disease."

Is America about to have serious problems due to monkeying with biological sex?
99% (364 Votes)
1% (3 Votes)

The researches contend that sex and gender are not the same, arguing sex relates to biology and chromosomes but gender involves "societal roles, behaviors" and more.

The report said the World Health Organization stated: "Gender is used to describe the characteristics of women and men that are socially constructed, while sex refers to those that are biologically determined."