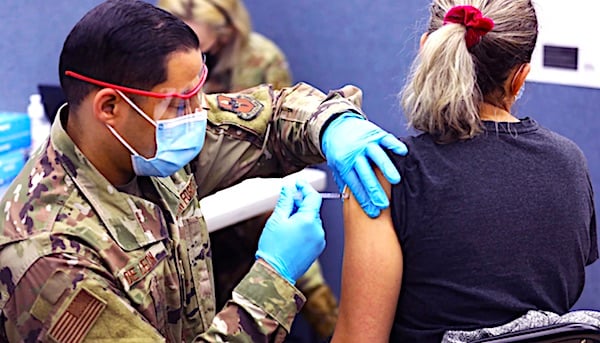 A woman's death, shortly after she got the single-dose Johnson & Johnson COVID-19 vaccine, now is under federal review.

Danny Avula, the vaccination coordinator for the state of Virginia, said the March death of the unidentified woman is being reviewed by the Centers for Disease Control and Prevention.

The confirmation comes after the annoucement of a pause in the vaccine's use in the United States after a recommendation by the FDA.

Johnson & Johnson announced Tuesday it paused its clinical trials and delayed the rollout of its shot in Europe until the review in the U.S. is completed.

The pause was triggered by a series of six women aged 18 to 48 who reported a "rare and severe type of blood clot" shortly after taking the Johnson & Johnson vaccine.

One of the victims has died.

It's not the only COVID-19 vaccine to be blamed for blood clots. Several European nations halted use of AstraZeneca's vaccine for that reason. And now Denmark has permanently banned use of the vaccine afte a safety review, Danish media reports.

The vaccine originally was put on hold in Denmark last month when a 60-year-old woman died with a "unique disease" profile that included internal bleeding, a very low platelet count and blood clots.

CNN reported the move was triggered by cases of a "rare and severe" type of blood clot in six patients, of more than 6 million recipients.

A statement from Dr. Anne Schuchat of the CDC and Dr. Peter Marks of the FDA said, "CDC will convene a meeting of the Advisory Committee on Immunization Practices (ACIP) on Wednesday to further review these cases and assess their potential significance."

They said the FDA "will review that analysis as it also investigates these cases."

"Until that process is complete, we are recommending a pause in the use of this vaccine out of an abundance of caution," the statement said. "This is important, in part, to ensure that the health care provider community is aware of the potential for these adverse events and can plan for proper recognition and management due to the unique treatment required with this type of blood clot."

Earlier this month, Germany, France, Italy, Spain and several other nations suspended the use of AstraZeneca's vaccine over concerns it is linked to blood clots.

The manufacturer denied any link, but an official with the European Union's agency in charge of evaluating medicines believes there is a "clear association" between the two.

Reuters reported Marco Cavaleri, the chairman of the the European Medicines Agency team evaluating the vaccine, said that in his opinion, "we can now say it, it is clear that there is an association (of the brain blood clots) with the vaccine."

And the problem appeared to be spreading, with the Canadian Press reporting a Quebec woman developed a blood clot after being treated with the AstraZeneca vaccine.

"The news came as Health Canada said it was investigating reports of clots linked to the Johnson & Johnson vaccine in the United States," the report said.

Johnson & Johnson said in a statement, "We have been working closely with medical experts and health authorities, and we strongly support the open communication of this information to healthcare professionals and the public."

The company confirmed others have reported severe headache, abdominal pain, leg pain or shortness of breath after their vaccinations.

American Health officials continue to urge citizens to get vaccinated.