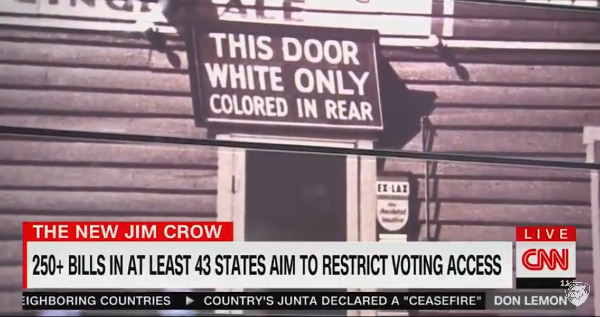 The new Georgia law designed to improve the integrity of elections has been maligned by President Biden as "Jim Crow on steroids."

The Washington Post fact-checker gave Biden its maximum "four Pinocchios" for false statements he made about the law. And he and members of establishment media have pushed the narrative that requiring a photo ID to vote amounts to racist, voter suppression. That's in spite of polls showing minorities reject that condescending claim as much as the overall population, with as many as 80% of voters favoring voter ID.

The Media Research Center, known for monitoring the bias of establishment media, takes up the issue in a video presentation.

But they are misleading audiences, MRC argues, because they are talking about a bill that actually expands voting access in the state.

Art Moore
Art Moore, co-author of the best-selling book "See Something, Say Nothing," entered the media world as a PR assistant for the Seattle Mariners and a correspondent covering pro and college sports for Associated Press Radio. He reported for a Chicago-area daily newspaper and was senior news writer for Christianity Today magazine and an editor for Worldwide Newsroom before joining WND shortly after 9/11. He earned a master's degree in communications from Wheaton College.
@@arthurdmoore
Major study shows ZERO deaths from COVID among healthy kids
Fatal flaw found in study touted by media as evidence 'masks work'
'You feel like you're in prison': Aussie recounts ordeal in COVID camp
CDC expands surveillance at major U.S. airports
Vaccine inventor: 'Fundamentally evil' COVID policies harming children
See more...