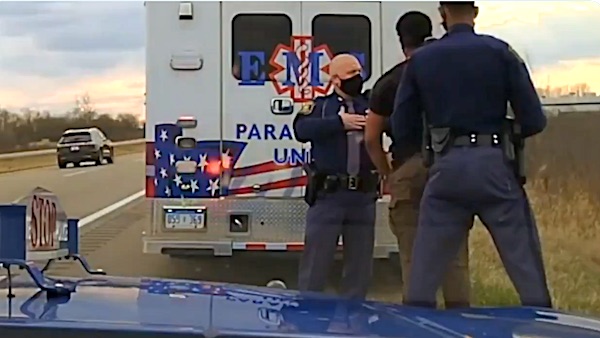 State Rep. Jewell Jones, D-Mich. center, being questioned by police after driving his vehicle into a ditch. (Video screenshot)

A Michigan lawmaker who allegedly drove drunk into a ditch threatened to call "Gretchen" when confronted by police and warned them, "I run you all's budget, bro."

"Gretchen" would have been Democratic Gov. Gretchen Whitmer.

WDIV-TV in Detroit reported it was state Rep. Jewell Jones who had a collision in Fowlerville on April 6.

"Jones was arrested on suspicion of drunk driving and resisting arrest after a crash on I-96 near Fowlerville. State police troopers said they found Jones’ SUV with the vanity plate ELECTED in a ditch," the report said.

The video shows him being wrestled to the ground as officers repeatedly tell him to stop resisting.

The report said, "Police said Jones -- who refused a blood test -- had a blood-alcohol content of 0.19% after a warrant was obtained -- more than twice the legal limit."

Potential charges for the 26-year-old include resisting and obstructing officers – a felony – driving with a high blood-alcohol content, reckless driving and possessing a weapon while under the influence.

The Fox affiliate in Detroit noted Jones' Glock pistol was sitting next to him in the cupholder.