There has been a lot of bad news lately in America. Riots, unrest, crime, murder … is there any good news to be had?

Fear not. The United Nations Women are here to help.

Yes, there is a group called United Nations Women. They're all about economic empowerment and sustainable development agendas (among much else), and a few months ago they put forth the solution to all the problems in the world: A mythical country called Equiterra, "where gender equality is real."

"In Equiterra," states the website, "all people have equal rights and opportunities, regardless of their gender. Women and girls feel safe when walking at night. They get paid equally as men, for work of equal value. Men and women share chores and care duties at home, and they can access high quality care at affordable rates. Isn't that fabulous!"

Yowza. Sure sounds fabulous to me. Let's go on a little tour of Equiterra's "bustling capital" and admire some of its landmarks, shall we? (Close-up illustrations of each landmark are available at the original link.) 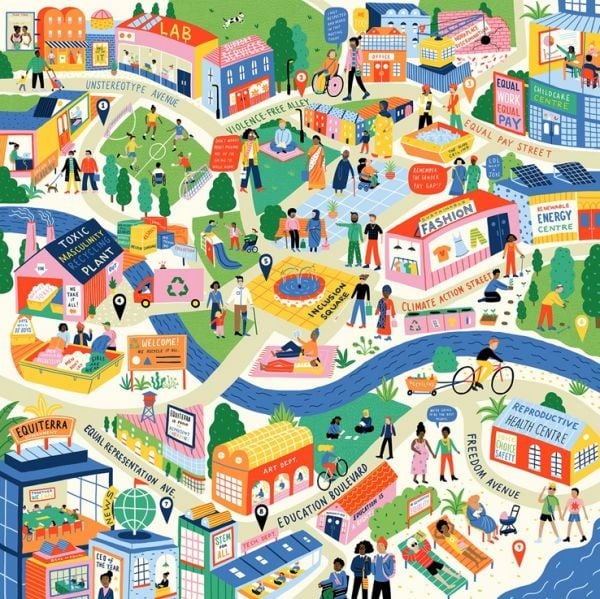 "Equiterra exists only in our imagination," mourns U.N. Women at the end of the tour, "but it's a place that we can all aspire to build. To date, no country in the world has achieved gender equality."

You'll probably notice a theme as you read through the amenities of Equiterra: Everything is the fault of men. Gosh, if women were in charge of the world, Equiterra would be achievable right away. The only men permitted in Equiterra would be emasculated ones, suitably woke and with all testosterone drained via the Toxic Masculinity Recycling Plant.

Of course, no mention (much less credit) is given for all the unsung and presumably male heroes who build the city in the first place. Who is logging the timber, smelting the metals, laying the sewer pipes, constructing the homes, wiring the buildings, paving the streets, extruding the recycled plastics for creating the recycling and compost bins, and otherwise building this Utopian city? Presumably U.N. Women would want the Toxic Masculinity Plant built last of all, after the toxic men finish working their fingers to the bone building the women's gender-equal citadel. Because one thing is for certain: Women won't build this city. The jobs are too tough, too dirty, too unappreciated. What's the fun in that?

Now granted, since Equiterra was conceived by United Nations Women, they have legitimate concerns about parts of the world dominated by The-Religion-Which-Shall-Not-Be-Named where women are truly oppressed and child marriages are common. But U.N. Women apparently prefer to blame men rather than culture.

"The most disturbing thing about the exercise is how childish it is," observes Andrea Widburg with American Thinker."Every year, America provides about one-fifth of the U.N.'s budget. In 2018 alone, America sent that organization $10 billion. In exchange for that money, we get a World Health Organization that dances to China's tune, an anti-Semitic obsession with Israel, United Nations workers who are routinely caught abusing women and children, climate change hysteria, anti-Americanism, anti-gun activism – and the above-described puerile nonsense."

And just think: With Democrats in charge, Equiterra – with its "Toxic Masculinity Recycling Plant" – could be just one reeducation camp (gulag) away.

WND's Email to the Editor page is coming back! Help us restart it by sending your submissions to [email protected]