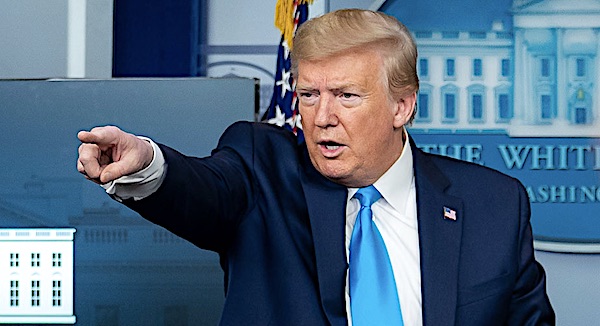 It's a claim along with the likes of neo-Nazis are "fine people" that has become a symbol for the left of Donald Trump's diabolical character -- the assertion one year ago that the then-president suggested Americans could inject bleach in their bodies to kill the COVID-19 virus.

The bleach claim originated April 23, 2020, during the White House Coronavirus Task Force briefing in a discussion about possible COVID-19 treatments, including UV light.

Trump said: "And then I see the disinfectant, where it knocks it out in a minute. One minute. And is there a way we can do something like that, by injection inside or almost a cleaning? Because you see it gets in the lungs and it does a tremendous number on the lungs. So it would be interesting to check that. So, that you’re going to have to use medical doctors with. But it sounds — it sounds interesting to me."

In the same briefing, a reporter asked Bill Bryan, the acting under secretary for Science and Technology at the Department of Homeland Security:  "The president mentioned the idea of cleaners, like bleach and isopropyl alcohol you mentioned. There’s no scenario that could be injected into a person, is there?"

"It wouldn’t be through injection. We’re talking about through almost a cleaning, sterilization of an area," the president said. "Maybe it works, maybe it doesn’t work. But it certainly has a big effect if it’s on a stationary object."

As Margolis points out, it was a reporter, not Trump, who connected bleach to injections.

Trump corrected the reporter, but it didn't stop media from running with the claim that the president wants to inject people with bleach.

"Trump unquestionably is unfit to serve as president. He endangers every American," Kirschner tweeted. "Most directly, he endangers his supporters, many of whom either believe the virus is a hoax (prompting them to engage in dangerous behavior) or now that injecting/ingesting disinfectants is in order."

And it hasn't stopped, with the Huffington Post declaring Friday "It’s Been Exactly 1 Year Since The Most Insane Moment Of The Trump Presidency."

Democrats, including Joe Biden -- who says it was the reason he ran for president --also haven't stopped repeating the Charlottesville lie.

In fact, during his remarks on 2017 on the clash in Charlottesville, South Carolina, Trump immediately made it clear he was not talking about "the neo-Nazis and white nationalists," explicitly declaring "they should be condemned totally."

Nevertheless, Biden said during his acceptance speech at the Democratic National Convention last August that Trump's words were "a wake-up call for us as a country" and, for him, "a call to action."