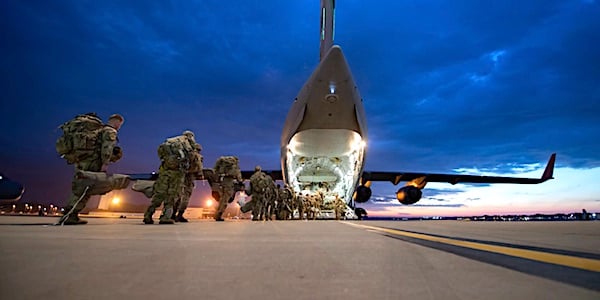 U.S. and British soldiers board a C-17 Globemaster III at Pope Air Force Base, North Carolina, May 7, 2021. The soldiers were on their way to take part in Defender-Europe 21, a large-scale training exercise designed to build readiness and interoperability between the U.S., its NATO allies and partner militaries. (U.S. Department of Defense photo)

A letter that has been signed by some 120 retired military leaders who served America in some of its darkest hours and places is warning that the nation may not survive the attack on the Constitution being orchestrated by Joe Biden, the president.

"Our nation is in deep peril," says the letter.

Biden has, of course, implemented a multitude of socialist ideas for Americans, essentially without even the benefit of Congress, and the letter pointed that out.

"The current administration has launched a full-blown assault on our constitutional rights in a dictatorial manner, bypassing the Congress, with more than 50 executive orders quickly signed, many reversing the previous administration's effective policies and regulations," they wrote. "Moreover, population control actions such as excessive lockdowns, school and business closures, and most alarming, censorship of written and verbal expression are all direct assaults on our fundamental rights."

They pointed to the 2020 elections, however, as the most significant red flag.

"Without fair and honest elections that accurately reflect the 'will of the people' our constitutional republic is lost. Election integrity demands insuring there is one legal vote cast and counted per citizen. Legal votes are identified by state legislature's approved controls using government IDs, verified signatures, etc.

"Today, many are calling such commonsense controls 'racist' in an attempt to avoid having fair and honest elections. Using racial terms to suppress proof of eligibility is itself a tyrannical intimidation tactic. Additionally, the 'Rule of Law' must be enforced in our election processes to ensure integrity," they wrote.

"The FBI and Supreme Court must act swiftly when election irregularities are surfaced and not ignore them as was done in 2020."

And they warned against the Democrats' openly proclaimed congressional agenda point of taking over all elections in the nation entirely, banning state security requirements and imposing hugely suspect processes such as mail-in ballots for all and hired ballot collectors who would take votes from individuals – and then turn them in.

They object to the "litany of left-wing pursuits showcased in the first 100 days of the new administration led by President Joe Biden, who has redefined what it means to run a far-left presidency," the report said.

They cited the Democrats' attack on elections, demand for open borders, unlimited censorship from Big Tech, the attempt to return to the Iran nuclear deal, the damage to the nation's energy independence, and more.

"Under a Democrat Congress and the current administration, our country has taken a hard left turn toward socialism and a Marxist form of tyrannical government," they charged.

Biden, whose president rests on no more than some 43,000 votes spread across three battleground states – where election actions and results prompted calls for investigations into alleged fraud – is working with a 50-50 Senate and an extremely narrow margin of majority in the House, which may be why he's doing so many actions by executive fiat.

The letter asks Americans to toss out far-left politicians and instead choose candidates who value fiscal responsibility and individual rights over socialism.