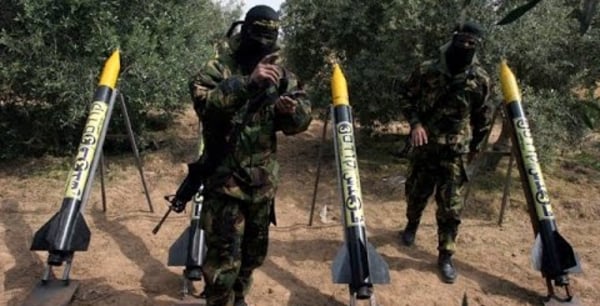 The Hamas rocket attacks now targeting Israel's largest city have been characterized as "retaliation" in a tit-for-tat, "cycle of violence" with the Jewish state.

But it began when Hamas, a designated terrorist organization that rules Gaza, encouraged young people to stockpile rocks, stones and chunks of concrete in the Al Aqsa Mosque on the Temple Mount in Jerusalem, pointed out Joel Rosenberg in an interview Tuesday with David Brody on Real America's Voice.

Rosenberg, editor-in-chief of All Israel News, noted Hamas instructed the Palestinian youth to throw the rocks at Jewish worshipers in the Western Wall plaza.

"That's what tactically set this thing off," he said.

Israel forces then had to move in to the Temple Mount to protect the worshippers and "stop this violation of religious freedom," said Rosenberg, an American-Israeli citizen who now lives in Israel.

But that's not what generally is heard in establishment media, said Rosenberg, the author of best-selling novels centered on Israel and Islamic terrorism.

"The media act as though, suddenly, one day Israel decided to be mean to Palestinians and started bombing Gaza," he said.

Rosenberg also noted that Hamas is upset that the Palestinian leadership in the West Bank called off an election, allegedly because they thought Hamas would win.

The Palestinian Authority is split between Hamas and Fatah, the party of the late Yasser Arafat, which both claim to be the true representatives of the Palestinian people. Hamas rules the Gaza Strip while Fatah governs the West Bank from Ramallah.

Hamas, Rosenberg said, has decided "to create a moment to let everyone know they are in charge, and they are the ones who are tough, and the other guys are weak."

"It's a bad convergence, a perfect storm of trouble," he said.

On Monday, Israel's ambassador to the U.S., Gilad Erdan, charged Rep. Rashida Tlaib, D-Mich., was "stoking tensions" when she criticized Israel after Israeli police moved in to the Al-Aqsa compound on Friday.

"Congresswoman @RashidaTlaib maybe you should open your eyes to the whole picture? Islam’s 3rd holiest site is being used to stockpile Molotov cocktails and rocks that are being lobbed at the police and at Jewish worshippers praying at the Western Wall, below the Temple Mount," Erdan wrote on Twitter.

"Congresswoman, instead of calling for peace and calm, your tweets are the stoking tensions," Erdan wrote in another tweet. "Maybe you don't realize that your words encourage terror groups such as Hamas to fire rockets into civilian populations and carry out attacks against Jews."

Tlaib also criticized President Biden and Secretary of State Antony Blinken for not protesting Israel's defensive moves and for continuing to provide aid to the Jewish state.

"I was 7 years old when I first prayed at the Al Aqsa with my sity. It's a sacred site for Muslims," Tlaib wrote on Twitter. "This is equivalent to attacking the Church of the Holy Sepulchre for Christians, or the Temple Mount for Jews. Israel attacks it during Ramadan. Where's the outrage @POTUS?"

"Congress must condition the aid we send to Israel, and end it altogether if those conditions are not followed. Statements aren't working @SecBlinken. Enough is enough," she wrote.

'The right and the obligation to act'

Israel on Tuesday called on 5,000 reserve soldiers to reinforce its defenses amid rocketfire from Gaza that began targeting Tel Aviv.

More than 800 rockets have been fired at Israel since Monday. Three Israelis were killed Tuesday and a bus struck by a rocket in Holon, south of Tel Aviv, the Jerusalem Post reported.

Israeli Defense Minister Benny Gantz said Israel has "the right and the obligation to act and will continue to do so."

In an effort to protect Palestinian civilians, Israel gives warning when it strikes  rocket launchers. But Hamas, which receives some $30 million a month from Iran that is channeled to weaponry, uses civilians as "shields," exploiting their deaths to draw global sympathy and support.

Footage from #Gaza of a Palestinian receiving a call from the IDF warning him to evacuate the building that is being used by terrorists to fire rockets. The IDF is saving lives, even while they fight terror. pic.twitter.com/EXODUnVb1e

Gaza terrorists hit the same Ashkelon power plant that provides a large portion of the electricity in Gaza. pic.twitter.com/En175lOXQN

RAW FOOTAGE: This is the moment the Iron Dome intercepted a barrage of rockets over Tel Aviv and central Israel. pic.twitter.com/8jl8OTgWCl

A bus in the Israeli city of Holon is hit with a rocket from Gaza
pic.twitter.com/1XYViYUPnb