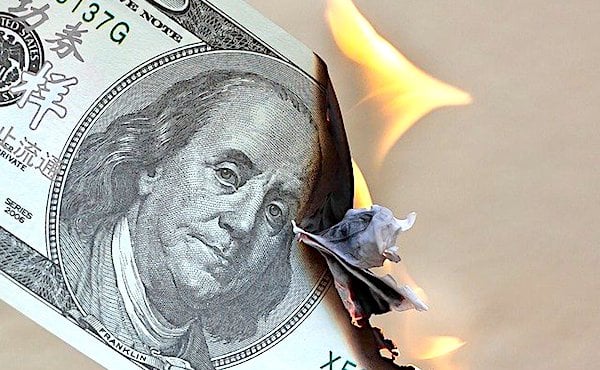 (Image by Foto-Rabe from Pixabay)

"Should Americans be worried about inflation, sir?"

That was a question posed to President Biden by a reporter at the White House on Wednesday.

Biden didn't answer as he walked away from the microphone.

But Bureau of Labor Statistics data announced Wednesday morning indicate Americans, indeed, should be concerned if they aren't already.

The consumer price index, which measures a basket of goods as well as energy and housing costs, increased 0.8% from the prior month.

Bloomberg called it "a sign burgeoning demand is giving companies latitude to pass on higher costs."

Excluding the volatile food and energy components, Bloomberg reported, the so-called core CPI rose 0.9% from March, the most since 1982.

President Biden goes to leave the lectern after a press conference but comes back, "I'm not supposed to be answering all these questions. I'm supposed to leave."

At the end, Biden does walk away from a question about Americans' concerns over rising inflation. pic.twitter.com/VykilNtjMI

Bloomberg's Peter Coy summarized the causes: "Iron, copper, lumber, cotton, computer chips, and gasoline are jumping in price. The dollar has weakened, making imports more costly. Employers are having to raise wages to fill record openings; the federal government is spending heavily; and consumers emerging from the pandemic are in the mood to light some money on fire."

Moore said it boils down to basic economics.

"Inflation is too many dollars chasing too few goods, right, and that’s precisely what we have right now," he said.

On the CNBC program "Squawk Box," Hungarian-American billionaire Thomas Peterffy said he has serious concerns about what economic indicators portend for the coming year.

"I hear numbers like this I look back to my childhood growing up in Hungary where I was playing with billion-dollar bank notes. ... The value of money meant nothing," said Peterffy, the founder, chairman, and the largest shareholder of Interactive Brokers.

"So, I'm very worried that this is an unstoppable situation, because the longer the Fed waits, the more they will have to raise the rates," he said.

At 3.75%, the annual debt service is going to be $1 trillion, Peterffy noted, "so we basically are painting ourselves into a  box, and I don't see how we are going to get out of it."

Sen. Rob Portman, R-Ohio, said the labor statistics are "exactly what you would have expected" as a result of Biden's policies.

"The answer is, of course, not to raise taxes now, not to keep priming the pump, not to keep putting more money into circulation, but to allow this economy to grow in a steady way so we don't have this spike in inflation, so we don't have these higher interest rates, so we can get back to the kind of pre-COVID economy we had," he said in an interview with Fox News' Charles Payne.

The pre-COVID economy under President Trump, the senator said, was a "very inclusive economy where we had higher wages, particularly among lower and middle income workers."

"We had the lowest poverty rate in the history of our country going back to the 1950s," he noted.

"Things were going pretty well, people coming off the sidelines. Let's get back to that."

"Whenever I hear numbers like this I look back to my childhood growing up in Hungary where I was playing with billion-dollar notes. The value of money meant nothing," says Thomas Peterffy on inflation worries. "I'm very worried this is an unstoppable situation." pic.twitter.com/TTVgUl6Kw4