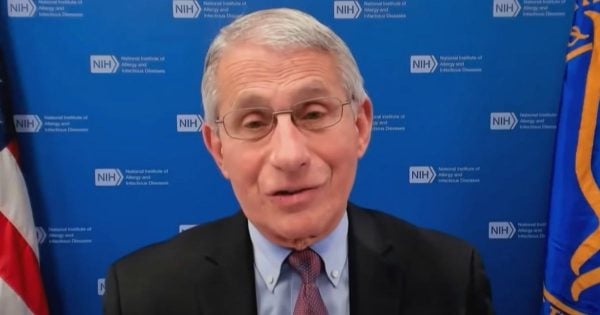 For the past year, Dr. Anthony Fauci has insisted that the novel coronavirus did not originate in a Chinese lab, joining media and "fact-checkers" in dismissing it as a wild "conspiracy theory."

But amid growing counter-evidence, President Biden's top White House health adviser admitted in an interview that the lab-leak theory is a possibility.

PolitiFact asked Fauci in the May 11 interview, which was widely reported Monday, "There’s a lot of cloudiness around the origins of COVID-19 still, so I wanted to ask, are you still confident that it developed naturally?"

"No, I'm not convinced about that," Fauci replied. "I think that we should continue to investigate what went on in China until we find out to the best of our ability exactly what happened."

He then referenced the probe by the joint China-World Health Organization team, whose sole American member had a clear conflict of interest as a collaborator with bat coronavirus research at the Wuhan Institute of Virology.

“Certainly, the people who’ve investigated it say it likely was the emergence from an animal reservoir that then infected individuals,” said the White House coronavirus adviser.

"But it could’ve been something else, and we need to find that out," he continued. "So, you know, that’s the reason why I said I’m perfectly in favor of any investigation that looks into the origin of the virus."

For the past year, however, Fauci has largely dismissed the lab-leak theory. In a May 2020 interview with National Geographic, he said the evidence is "very, very strongly leaning toward this could not have been artificially or deliberately manipulated."

On Monday, CBS News correspondent Weijia Jiang reported on Twitter that she asked Fauci about his apparent about-face on the issue.

Fauci maintained that his opinion about the origins of COVID-19 has not changed.

"He believes that it is 'highly likely' that it first occurred naturally before spreading from animal to human. Since no one is 100% sure, he’s open to a thorough investigation," Jiang wrote. "Dr. Fauci said that does not mean he believes the virus first emerged in a lab, as some have suggested."

The CBS reporter said Fauci told her he does not know anything about the three researchers at the Wuhan lab who sought hospital care in November 2019, as reported by the Wall Street Journal on Sunday.

'Not based in any fact at all'

The PolitiFact interview took place May 11, hours after Fauci was confronted by Sen. Rand Paul, R-Ky., during a hearing. The senator asked Fauci if the NIH funded "gain-of-function" research at the Wuhan lab. Fauci declared "the NIH and NIAID categorically has not funded gain-of-function research to be conducted in the Wuhan Institute."

"It's really unfortunate he brought that up. It really does nothing but cloud the issue of what we're trying to do," Fauci said.

He said Paul spoke in "an accusatory way that just made no sense and was not based in any fact at all."

However, Paul has cited evidence such as a National Institutes for Health project report in 2019 regarding NIH funds assigned to a nonprofit called the EcoHealth Alliance for research with the Wuhan lab constructing novel coronaviruses and assessing their ability to infect human cells.

Fauci argued against the lab leak theory at a news conference in April 2020 in which he cited a study led by computational biologist Kristian Andersen of the Scripps Research Institute in California concluding SARS-CoV-2 "is not a purposefully manipulated virus."

But Wade showed how the signatories "were assuring the public of facts they could not know for sure were true."

It turned out that the letter had been organized and drafted by the president of the EcoHealth Alliance, Peter Daszak.

The fact that Daszak's organization funded coronavirus research at the Wuhan lab -- a clear conflict of interest -- was not disclosed to The Lancet's readers, Wade noted. To the contrary, the letter concluded, "We declare no competing interests."

On Sunday night, Wade said in an interview with Mark Levin on Fox News that the Chinese have had a "free ride" so far, because no one has put pressure on them "to tell us what really happened."

See part I of Wade's interview with Levin:

On Sunday, Sen. Tom Cotton, R-Ark., told Maria Bartiromo on Fox News' "Sunday Futures" that the Biden administration needs to demand answers from the Chinese Communist Party, which has blocked access to hard evidence from the Wuhan lab.

Cotton said it's a "common-sense proposition" that the virus "started not up in some remote mountain village with caves full of bats, but rather in downtown Wuhan, a city larger than New York, just a few blocks up the road from labs that was researching bat-based coronaviruses."

"And, since then, every bit of circumstantial evidence -- to include evidence that came out in the final days of the Trump administration, that some employees and staff at these labs may have had coronavirus-like symptoms as early as October or September of 2019 -- continues to point to these labs as the origin of this virus, not that food market that the Chinese Communist Party used as a cover story from the very beginning."

The idea of "gain of function" is to increase the virulence and transmissiblity of a virus that is regarded as a potential threat to humans. The data is then used to begin developing vaccines and treatments in case of an outbreak. The obvious risk is that an experimental virus programmed to be highly contagious and powerful could be accidentally released.

Last Wednesday, Centers for Disease Control Director Rochelle Walensky admitted in response to queries by Republican Sen. John Kennedy that it's "possible" the COVID-19 virus could have leaked "from a lab."

On the same day, House Intelligence Committee Republicans released a report that concluded there is "overwhelming circumstantial evidence" backing the lab-leak theory.

Previously, a group of 18 prominent scientists published a paper in the journal Science calling for an investigation into the origins of the pandemic, insisting an accidental leak from a lab cannot be ruled out.