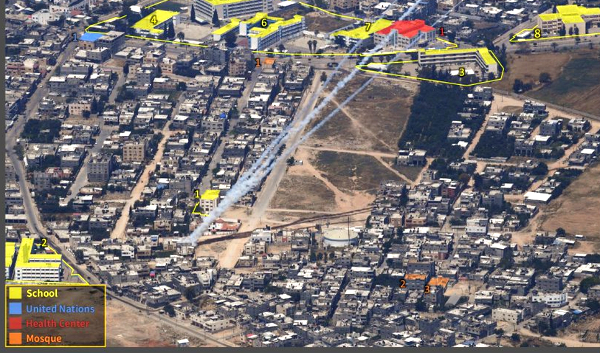 In denial of clear video and photographic evidence, a Hamas leader confronted by a British reporter insisted the terrorist group did not fire "a single rocket" from densely populated civilian areas in the Gaza Strip during its 11-day onslaught against the Jewish state.

Al-Zahar replied: "No single rocket was sent from a civilian area. We [fired] most of the rockets from the border."

"That’s not true, though, is it? Because we've seen video of rockets being fired from within the built-up area of Gaza City at Israeli communities."

Look closely: This photo was taken right after Hamas launched a barrage of rockets at Israel from a residential area in Gaza. Look what's near the launch site: schools, a UN building, a health center, mosques, and dozens of apartment buildings.

Hamas puts everyone in danger. pic.twitter.com/dVPpUUJVy3

Even groups that are anti-Israel, such as Human Rights Watch, have acknowledged the video evidence that Hamas routinely fires rockets from civilian areas, using Palestinian civilians as human shields.

It's not easy fighting a terrorist organization that embeds its military infrastructure in civilian areas.

We use the latest military technology to precisely strike Hamas targets, while minimizing damage to the surrounding areas.

The Gaza director of the U.N. Palestinian relief organization, UNRWA, which is no friend of Israel, acknowledged the sophistication of the IDF's precision strikes to minimize civilian casualties:

UNRWA's Gaza director on the sophistication of the IDF's precision strikes to minimize civilian casualties: pic.twitter.com/P12pjq1Sow

Palestinian terrorists in Gaza just fired a barrage of rockets toward Israeli cities.

Thousands of Israeli families are taking cover in bomb shelters.

"The new element is the degree of the resistance movement, particularly in Gaza, to attack the Israeli targets at very important points, including most of the overcrowded area in the civilian society. So for how long the Israeli will accept that, I think this is the main issue," he told Sky News.

The Hamas leader was asked if Israel had a right to exist.

In 2014, the IDF provided 12 examples of Hamas firing rockets from civilian areas: