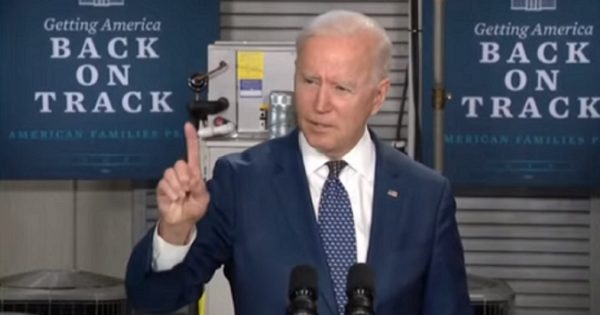 Speaking Friday after an extremely poor job-growth report, President Biden contended the federal unemployment insurance supplement is not to blame.

That's in spite of the fact that many business owners across the nation say they are struggling to get their employees to return.

Biden was asked by a reporter: "Do you believe enhanced unemployment benefits had any effect on diminishing a return to work in some categories?"

The president replied, "No, nothing measurable."

While job growth was expected to be about 1 million for April, only 266,000 new jobs were added.

Republican lawmakers have joined business groups in blaming the $300 weekly federal subsidy, which enables some workers to make more money staying home. The subsidy, signed into law in March, is set to expire Sept. 6.

Neil Bradley, the Chamber of Commerce executive vice president and chief policy officer, said the jobs report "makes it clear that paying people not to work is dampening what should be a stronger jobs market."

"One step policymakers should take now is ending the $300 weekly supplemental unemployment benefit," he said.

But Biden insisted, nevertheless, that the report Friday is a "rebuttal to loose talk that Americans just don’t want to work."

"I know some employers are having trouble filling jobs. But what this report shows is that there’s a much bigger problem — notwithstanding the commentary you might have heard this morning," he said. "It is that our economy still has 8 million fewer jobs than when this pandemic started. The data shows that more workers — more workers — are looking for jobs and many can't find them."

At a White House press briefing later Friday, Treasury Secretary Janet Yellen said she didn't think the subsidy was "the major factor is the extra unemployment."

"There’s no question that we’re hearing from businesses that they are having difficulty hiring workers," Yellen said.

But she insisted there is no data associating the low job numbers with additional unemployment benefits.

"If it were really the extra benefits that were holding back hiring, you’d expect to see that in either in the states, or in workers, or in sectors where the replacement rate to the UI is very high, you’d expect to see lower job-finding rates, and in fact what you see is the exact opposite," she said.

However, 42% of people currently claiming unemployment insurance are receiving more money now than when they were working, according to a University of Chicago study, the New York Post reported.

White House press secretary Jen Psaki argued that under the rules, people receiving the unemployment payments "must be available and actively seeking work, and workers are not permitted to refuse suitable work and continue to receive benefits."

However, under the pandemic program, she acknowledged, people can receive benefits "if they are sick with COVID, taking care of someone sick with COVID or offered a job in an unsafe workplace."

Critics argue that amid conflicting claims about "the science" on COVID-19, "unsafe workplace" can be defined broadly.

'Joe Biden is paying people not to work'

Republican House Minority Whip Rep. Steve Scalise said the "terrible" jobs report should have been no surprise to Biden.

– Paying people not to work

What did he expect?

The Republican governors of Montana and South Carolina announced their states will end the unemployment benefits next month.

"Incentives matter, and the vast expansion of federal unemployment benefits is now doing more harm than good," Gianforte said. "We need to incentivize Montanans to reenter the workforce."

On Thursday, Florida Gov. Ron DeSantis said that people receiving unemployment benefits will soon need to provide proof that they're looking for a job.

"Normally when you're getting unemployment, the whole idea is that's temporary, and you need to be looking for work to be able to get off unemployment," DeSantis said at a news conference.

"It was a disaster, so we suspended those job search requirements. I think it’s pretty clear now, we have an abundance of job openings."

Art Moore
Art Moore, co-author of the best-selling book "See Something, Say Nothing," entered the media world as a PR assistant for the Seattle Mariners and a correspondent covering pro and college sports for Associated Press Radio. He reported for a Chicago-area daily newspaper and was senior news writer for Christianity Today magazine and an editor for Worldwide Newsroom before joining WND shortly after 9/11. He earned a master's degree in communications from Wheaton College.
@@arthurdmoore
Police union chief: Portland politicians 'encouraged and enabled' violence
Teachers instructed to classify 'Make America Great Again' as racist
Peter Daszak dismissed from U.N.-backed COVID-origin probe
Fauci's bosses funded virus research by Chinese-military front
Milo Yiannopoulos invites gays to get help at his clinic
See more...