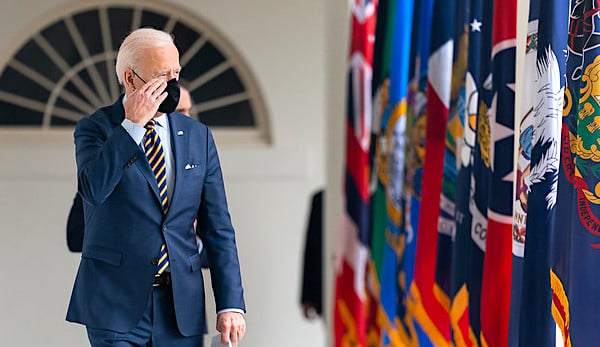 President Joe Biden salutes as he walks along the Colonnade of the White House on Friday, March 12, 2021, en route to the Oval Office. (Official White House photo by Adam Schultz)

A U.S. senator and a former national security adviser have joined together in a commentary published at Real Clear Politics to warn President Biden he must reverse course on Iran "before it is too late."

Sen. Bill Hagerty, R-Tenn., and H.R. McMaster, a retired Army lieutenant general who was President Trump's national security adviser from 2017 to 2018, contend that Biden's agenda of "conciliation" to Iran, like the same practice used by former President Barack Obama, is failing.

For years, they explained, America has "mistakenly assumed the regime can be tamed by conciliatory diplomacy. Western efforts to placate Tehran have failed consistently since the revolutionaries took power in 1979, yet recent reports indicate President Biden is in the process of repeating this failure."

"Just as the Obama administration did with its disastrous 2015 Iran nuclear deal, the Biden administration is now seeking to lift economic sanctions against Iran in exchange for temporary commitments from Tehran to curb its nuclear program. A senior State Department official recently revealed that the Biden administration is reviewing all U.S. terrorism and human rights sanctions on Iran since 2017 to assess whether those sanctions were 'legitimately imposed,' and that some sanctions will need to be lifted to ensure Tehran is 'benefiting' from the nuclear deal," they explained. " Like Obama, Biden hopes that relaxing economic pressure can convince the regime to put aside its nuclear ambitions, focus on Iran's economy and people, stop bankrolling terrorist proxies, and become a normal member of the international community."

That's not only "misguided," but "naïve," they said.

That Obama-Biden mirage is that "conciliation can change not only the behavior, but also the very nature, of the Iranian regime is based on the false assumption that U.S. policy drives the Iranian regime's attitudes and behaviors."

They said actually, "Since 1979 the regime has based its decision making on an expansionist revolutionary ideology that is fundamentally hostile to the United States, Israel, Iran's Arab neighbors, the West, and our allies around the world…"

Any moderation of Tehran's behavior, they explained, has happened "in response to intense political, economic, and military pressure."

The two said the U.S. needs to work to maintain and improve "defenses against Iranian military and terrorist capabilities," keep focused on disrupting Tehran's nuclear weapons agenda, and impose financial costs on the regime to limit what the radicals have to wage proxy wars.

"During our time in the Trump administration, we both were directly involved in persuading U.S. allies to join in enforcing sanctions designed to deny Khamenei the cash he requires to fund proxy wars," the wrote. "Convincing Japan to cease importing Iranian oil, for example, was a hard-won achievement that took months of tough negotiations, but created real leverage, as did similar efforts with other oil importers."

But they said such advances require "tending" and the Biden administration is failing.

"Noting Biden’s intent to relax sanctions on Tehran, China has increased imports of Iranian oil to nearly one million barrels per day, a threefold increase from last year," they wrote.

"President Biden should reverse course before it is too late."