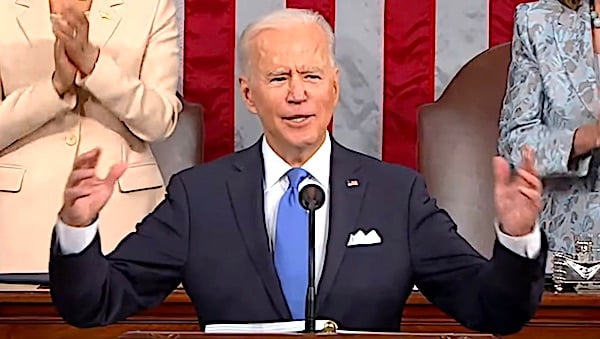 Presidential candidates often make big promises for what they will do in their "first 100 days" when elected.

Joe Biden was no different, telling his financial supporters about his plans for COVID vaccines, which President Trump already had had ready, and his agenda to nationalize their pro-LTGBQ, open borders and no-restrictions voting plans.

But what he actually has accomplished is something else, according to an analysis from Liberty Counsel, an organization that focuses civil and religious rights, including the right to life.

"When Joe Biden ran for president, he made repeated promises to expand abortion and undo many of the pro-life measures implemented under the Trump administration," the organization reported. "In the short time Biden has been in office, he has quickly worked to make good on those promises, ensuring what will be a lasting legacy of death."

In fact, the organization reported, Biden already has moved 10 times against the lives of the unborn, including just a day or so after his inauguration when he confirmed his intention to put the Roe v. Wade Supreme Court decision that created a "right" to abortion into federal law.

Then, a few days after that, he released a plan to "protect" women's health, through which he withdrew the U.S. from the Geneva Consensus that declared "there is no international right to abortion," repealed the Mexico City policy that prevented U.S. funding of international abortion, reversed the Title X rule that prevented federal funding of facilities that do abortions, and restored U.S. taxpayer money to the United Nations Population Fund, which promotes abortion including in countries that impose forced abortions.

But, Liberty Counsel reported, Biden was only halfway there.

Other moves included the $1.9 trillion American Rescue Plan Act that provides hundreds of millions that can be assigned to abortionists and his nomination of the radically pro-abortion Xavier Becerra as secretary of Health and Human Services.

"Throughout his time as a U.S. representative and the attorney general of California, Becerra showed support for barbaric abortion practices, including partial-birth abortion and infanticide, forcing taxpayers to pay for abortions and violating the consciences of Americans. Becerra tried to force pregnancy care centers to promote abortions in California and sued nuns, asserting they should pay for contraception and abortifacients," the report charged.

Biden also has demanded passage of the "Equality Act" that states "pregnancy, childbirth or a related medical condition shall not receive less favorable treatment than other physical conditions," and is perceived to "create a federal 'right' to abortion and will preempt every state law," Liberty Counsel said.

Then Biden approved "telemedicine abortions," which previously had been restricted because of the danger to a woman taking drugs without a doctor's supervision, and then he announced he would make Americans "fund research that uses tissue from aborted babies."

WND reported only days earlier on a webpage created by the Family Research Council, called "Tracking the Biden Administration," that shows that more than half of the president's executive actions have had one focus.