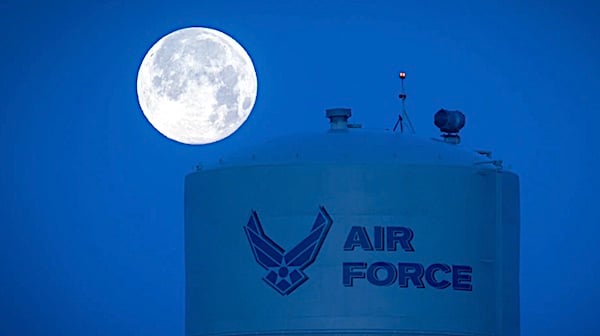 A super pink moon sets over Hurlburt Field, Florida, April 27, 2021. Throughout the evening of April 26 and the morning of April 27, the moon was an average 6 to 8% closer to the distance of Earth than a typical full moon. (U.S. Air Force photo by Master Sergeant Cody H. Ramirez)

Space is the ultimate strategic high ground. Whichever nation controls this domain will have unprecedented access to the terrestrial strategic sectors (land, sea, air, and even cyberspace). The United States has been the dominant space power thus far, but the days of America’s unquestioned hegemony in orbit are coming to a close.

Unlike the ISS which is truly an international effort based on peace, China’s modular space station is—like so many things that China does today—a nationalistic endeavor with a militaristic flair.

It’s true that China’s space agency has said they welcome international missions to their new space station. But simple science has never been China’s end goal. In fact, by allowing for international scientific missions to their soon-to-be-launched space station, China will be getting access to the intellectual property and trade secrets of other nations and corporations. And like they have always done with foreign entities, China will pilfer what they need.

Essentially, international cooperation with China on their space station will amount to nothing less than the greatest technology transfer to China in history.

We know that China’s leaders have viewed their new station in strategic terms. In 2010, Beijing reorganized its military to fight—and win—a space war against the United States. So, while China’s new modular space station is nothing new (both the Americans and Russians have been operating space stations for decades), China’s space station program is one piece of a larger strategy for Beijing’s comprehensive dominance over the Earth.

Beyond that, a few years ago Chinese scientists advocated for installing a laser at the base of the Chinese Space Station once it was in orbit. China claimed that a laser could be used to clear dangerous space debris from around the Earth.

Of course, most systems in space are dual-use in nature. In peacetime, a laser could be used to clear dangerous space debris. In wartime, however, it could be used to disable critical American satellite constellations in orbit. When the Obama Administration proposed placing a laser on the ISS to clear space debris, it shied away, out of fears that either Russia or China would accuse Washington of weaponizing space.

The Chinese have little compunction about weaponizing space under the guise of making space safer for all. And China has already demonstrated a consistent disregard for international law, whether it be their illegal island building program in the South China Sea or their sloppy 2007 anti-satellite (ASAT) weapon test that created the world’s largest—and most dangerous—debris field around the Earth in history.

All of this is happening at a time when the ISS is nearing the end of its lifespan. To compound matters, Russia, a major contributor to the ISS, is threatening to detach its portions of the ISS soon in order to create a Russian station in orbit.

Moscow could ultimately link their space station to China’s new modular space station. Already, the space programs of both Russia and China have announced their intention to exclusively cooperate with each other in the development of a future lunar colony. Moving Russia’s ISS components away from the ISS and into the CSS would augment this growing authoritarian alliance in space. It’d also represent a seismic geopolitical shift away from the United States and toward a China-led Eurasian alliance for mastery of both the Earth and space.

Going forward, the United States must plan for a future where the ISS no longer factors into the budget. It is an aging station past its prime. NASA has expressed a desire to cannibalize its station program and build the Lunar Gateway program. Although, this seems like a waste.

Jeff Bezos’ Blue Origin company is attempting to build out the capacity to create private space stations between the Earth and moon. Bigelow Aerospace and Virgin Galactic—as well as a coterie of other private space start-ups—are thinking along similar lines. These companies should be encouraged to do so, even if it means the US taxpayer subsidizing some of these endeavors to keep America in the space station game—without distracting NASA from the greater mission of getting its astronauts back to the moon and beyond to Mars.

Time is running out. Few American policymakers are paying attention. If Washington does not take China’s space threat more seriously, it would find itself boxed out of the strategic high ground. The Chinese Space Station is yet another symbol of how badly American power in space is eroding.

Brandon J. Weichert is the author of “Winning Space: How America Remains a Superpower” (Republic Book Publishers). He can be followed via Twitter @WeTheBrandon.

WND News Services
These reports are produced by another news agency, and the editors of WND believe you'll find it of interest.
Major city will send taxpayer dollars to residents so they can donate to politicians
S&P 500 and Nasdaq close lower for 3rd day as investors look to Fed chair's speech
Judge allows Devin Nunes' defamation suit against Rachel Maddow to partially move forward
Twitter takes action on its COVID 'misleading information' policy
New Disney CEO pledges to double down on LGBT 'storytelling' in kids' movies
See more...