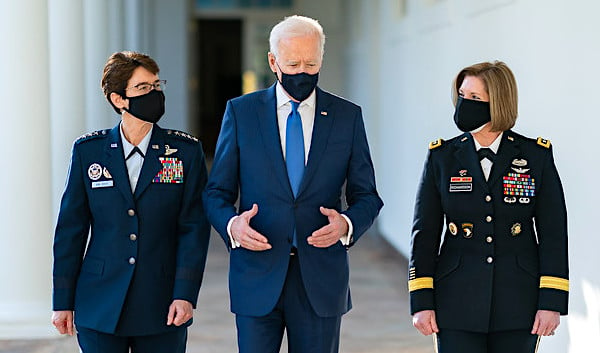 Human rights advocates, former hostages and some members of Congress are urging the Biden administration not to seriously engage with Tehran on reinstating the nuclear deal until all U.S. and Western hostages held in Iran are released, thus maintaining maximum leverage for their safe return.

"There should be no sanctions relief until at least the hostages are released and an agreement [is] in place" to prevent hostage taking from happening again, said Jason Poblete, a human rights attorney who represented released hostages Nizar Zakka and Xiyue Wang. Both Zakka and Wang were held for years in Iran before their release in 2019.

Hostage Aid Worldwide, a nonprofit organization that assists hostages and their families in seeking their safe release, sent a letter to President Biden and Secretary of State Antony Blinken in February, pressing him to secure the freedom of all hostages held in Iran as a precondition to negotiations over Iran's nuclear program. The group also asked the administration to secure a "credible guarantee that Iran will no longer engage in this inhumane practice."

"This is far more than merely a matter of human rights," the organization wrote. "It is fundamental to building mutual trust, which is the core of a sustainable deal."

The group followed up with a letter to all members of Congress this past weekend, imploring them to keep the pressure on Biden to secure the hostages’ safe return before ramping up nuclear talks.

"It is crucial that they seize the opportunity to learn from previous mistakes when some hostages were left behind pending planned goodwill gestures from Iran which never materialized," the group wrote.

The hostage issue burst into public view over the weekend when Iranian state-run news agencies began reporting on a deal for the Islamic Republic to release U.S. and British prisoners in exchange for a $7 billion payment from the U.S. The White House immediately denied that such a deal had been struck, but a knowledgeable source tells RealClearPolitics talks remain active, with European emissaries exchanging messages.

"There are ongoing discussions underway in Vienna in parallel with the nuclear talks and through the Europeans between the U.S. and Iran on the topic of a potential prisoner exchange, but it is important to emphasize no deal has been agreed to by anyone," the source said.

White House Chief of Staff Ron Klain on Sunday also appeared to confirm ongoing negotiations but said there is no agreement.

"We’re working very hard to get them released," Klain told CBS' "Face the Nation." "We raise this with Iran and our interlocutors all the time, but so far there’s no agreement."

If successful, the negotiations could free several high-profile Americans detained in Iran, including businessman Siamak Namazi, his elderly father, Baquer, as well as environmentalist Morad Tahbaz and businessman Emad Shargi. Another detainee, British citizen Nazanin Zaghari Ratcliffe, is also part of the negotiations, according to news reports.

Some advocates for those being held view the leak from Iran about a deal as an attempt by hard-liners there, including the Islamic Revolutionary Guard Corps (or IRGC), to thwart early progress on the nuclear talks by ginning up concern in Congress that the Biden administration would be making a huge ransom payment in addition to exchanging prisoners. But as with any negotiation, an ultimate payment could end up much lower, with the funds going to a variety of humanitarian causes in Iran, including COVID vaccines and medical supplies, with international oversight of how the money gets disbursed.

The talks are particularly sensitive right now after last week’s leaked tape of Iran’s foreign minister, Mohammad Javad Zarif, expressing frustration that the IRGC sets policies for the country. Zarif (pictured) also said Maj. Gen. Qassim Suleimani, the commander of the Guard’s elite Quds Force, was working with Russia to undermine the 2015 nuclear deal between Iran, the U.S. and other world powers. Suleimani was killed in January 2020 by a missile strike authorized by President Trump.

The extraordinary admission that the elected government of Iran does not control its foreign policy offers some explanation for the dual and often wildly conflicting messages coming out of Iran in 2014 and 2015 when the nuclear deal was being negotiated and formalized. The IRGC arrested Zakka -- who had been issued a visa by Iran to speak at a tech summit there -- one day after the congressional review period of the nuclear deal ended. (Senate Republicans had sought, unsuccessfully, to scuttle the agreement.) Siamak Namazi was arrested by the IRGC nearly a month later, on Oct. 15, 2015.

Poblete and other hostage advocates have spent years asking why then-Secretary of State John Kerry and the Obama administration didn't put the brakes on the deal and fight for the safe return of all U.S. hostages held in Iran. The day before the deal's implementation on Jan. 16, 2016, the administration organized an airlift of $400 million in cash to Iran that coincided with the release of four detained Americans. The funds were the first installment of a $1.7 billion settlement the U.S. reached with Iran to resolve a decades-old dispute over a failed arms deal signed just before the 1979 fall of Iran's last monarch, Shah Mohammad Reza Pahlavi.

But several American hostages in Iran didn't make the cut, including Zakka and the Namazis. And the hostage-taking didn't stop as the nuclear deal was being implemented. In August 2016, Wang, a PhD student at Princeton University, was arrested in Iran while there on a visa to study the Qajar dynasty.

The conflict between hard-liners and the more moderate government of Iranian President Hassan Rouhani has grown sharper as nuclear talks resume with the U.S. and as Iran approaches its June 18 presidential elections.

Meanwhile, in the wake of the leaked Zarif conversation, Republican members of Congress have ramped up their calls for the Biden administration not to relaunch nuclear talks because the Rouhani government cannot be trusted to stick to its end of the deal given that the IRGC apparently sets national policy. Republicans on Capitol Hill are also calling for an investigation into a blockbuster admission in the Zarif recording  -- that Kerry informed him that Israel attacked Iranian interests in Syria at least 200 times, to Zarif’s astonishment.

Kerry last week denied the assertion, calling it "unequivocally false," but questions on Capitol Hill remain. Some prominent senators have called for Kerry, who now heads Biden's climate change initiatives, to resign. Nineteen GOP senators sent an urgent letter to the president on Thursday accusing Kerry of working with American adversaries against our national security interests. Others have called for investigations into the Zarif admission.

Additionally, as nuclear talks began last month between the two nations, GOP Sens. Tom Cotton, Ted Cruz, Todd Young and Rick Scott re-introduced the Global Hostage Act, which would require the president to impose sanctions on foreign government officials responsible for taking Americans hostage and bar those officials from receiving U.S. visas. The bill also states that it is U.S. policy not to pay ransoms to secure the release of American citizens, or those lawfully admitted for permanent residence, who are taken hostage abroad.

"If you take an American hostage – it won't only be the hostage who will suffer," Cotton said. "America must never accept extortion by hostage-taking as the cost of doing business. It warrants severe consequences, and that's what this bill delivers."

Rep. Jim Banks, who chairs the Republican Study Committee, wrote a bill that would prevent either sanctions relief or any other form of ransom in exchange for the release of U.S. hostages held in Iran. It also prohibits the president from lifting sanctions on a country until all American hostages are released. The bill has 95 sponsors, including most House GOP leaders and a majority of Republicans on the Armed Services Committee.

Banks said he hopes the reports that Biden is considering a multibillion-dollar payment to Iran isn't true.

"President Biden seems not to have learned the mistakes of President Obama's weak foreign policy," Banks told RCP in a statement. "Providing ransom payments to terrorists for the release of U.S. hostages will only encourage Iran to take more hostages and put American families at risk.

"President Trump secured the release of two hostages in Iran without providing pallets of cash or lifting a single sanction," Banks added. "Instead he let out two non-violent prisoners whose sentences were nearly complete. That was a good deal for Americans. This isn't."

House panel to call Fauci as witness in COVID-origins probe

'Lives are at stake': Oxford to study ivermectin treatment for COVID-19