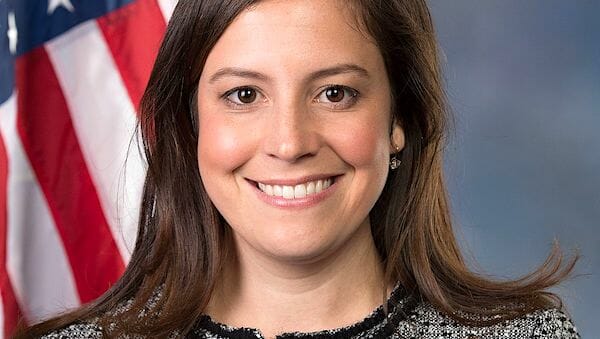 Republicans in the U.S. House on Friday elected Rep. Elise Stefanik, of New York, as their conference chair, replacing the ousted Rep. Liz Cheney, of Wyoming, whose incessant attacks on former President Trump tired the GOP.

The Washington Examiner reported that the vote was 134-46 for Stefanik over Rep. Chip Roy of Texas, who had mounted a late challenge to her.

She was part of the defense of Trump during his first House impeachment trial, and she supports his policies as needed for the GOP to regain the majority in Congress in 2022.

"Republicans voted to remove Cheney earlier this week in part because Cheney was publicly attacking Trump and working to steer the party away from him, which lawmakers said was dividing the party and distracting from the mission of regaining the House majority next year," the Examiner reported.

After she was removed from the party's No. 3 post in the House earlier in the week, Cheney unleashed on Trump.

And he lobbed the insults right back.

The fight between the two is over the 2020 election. While Joe Biden was elected, and certified, there remain many questions about the integrity of the results. Multiple lawsuits still are ongoing. A forensic audit is under way in Arizona. In Wisconsin, officials have confirmed that city officials essentially turned over control of the election to special-interest groups funded by leftist Mark Zuckerberg. In Michigan, a lawyer revealed that voting machines, in fact, contained software that could be used to alter the database.

Officials in all cases have defended their actions as legitimate.

Then there were those dark-of-the-night dumps of massive numbers of votes, almost always exclusively for Biden. And the unexplained halts in the counting, while Trump was leading, and Biden's sudden lead when they resumed.

What is not even in dispute is the fact that multiple times state officials changed state laws to accommodate voting under COVID-19, when the Constitution requires state lawmakers to set those polices and procedures.

Cheney repeatedly has bashed Trump for citing those circumstances, and claiming that the election was stolen from the GOP. Trump, meanwhile, has had no tolerance for Republicans like Cheney who joined a failed Democrat impeach and remove effort.

"Liz Cheney is a bitter, horrible human being," Trump said in a statement Wednesday after she was removed from her post as Republican Conference chair.

"She has no personality or anything good having to do with politics or our country. She is a talking point for Democrats, whether that means the Border, the gas lines, inflation, or destroying our economy."

Cheney, in turn, claimed, "We cannot let the former president drag us backward and make us complicit in his efforts to unravel our democracy. Down that path lies our destruction, and potentially the destruction of our country."

Cheney, shortly after the vote, promised reporters she would "do everything I can to ensure that the former president never again gets anywhere near the Oval Office. We have seen the danger that he continues to provoke with his language."

Trump, however, remains by far the most popular GOP leader in polling, and he actually is eligible to run again for the White House in 2024, if he chooses, a decision he has not yet announced.