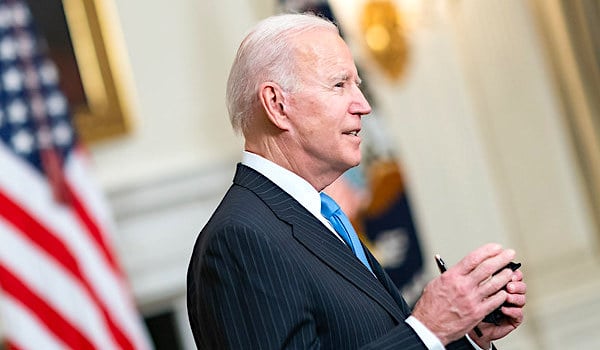 A federal judge has found that Joe Biden's American Rescue Plan Act of 2021, the first of his long list of spending proposals, uses "race-based and sex-based preferences" because he wanted to provide special benefits to women and racial minorities not available to men and whites, but that violates the U.S. Constitution.

U.S. District Judge Reed O'Connor last week granted a Temporary Restraining Order against the government and has scheduled a further hearing this week to review the evidence needed to support a request for a preliminary injunction.

The issue is that when the ARPA was adopted, it specified that the Small Business Administration had to prioritize businesses owned by "women," by "veterans" and by those "socially and economically disadvantaged" and process applications from only those for the first three weeks of the program.

Philip Greer, a white restaurant owner, sued because he could apply, but his application would not even be considered during that time period, although other applications from women or minorities would be not only processed but funded.

Greer owns the Ranch Café and explains he has lost nearly $100,000 in revenue during the COVID-19 pandemic.

The judge explained the concept of the government discriminating against some individuals by race or gender to remedy previous discrimination "falters" because it "lacks the industry specific inquiry needed to support a compelling interest for a government-imposed racial classification."

The judge said he understands "disparities," but to allow those actions without required evidence "would give … the governments license to create a patchwork of racial preferences based on statistical generalizations about any particular field of endeavor."

At risk is any benefit for Greer, since the government admitted that $2.7 billion of the funds available already have been sent out, and there are 150,000 pending requests for help from those to whom Biden gave preferential treatment.

Those requests are for some $65 billion, while the fund only has $28.6 billion.

Constitutional expert Jonathan Turley, who often is a commentator on television, called the conclusion "particularly jarring," because Biden "has spoken out often, eloquently and passionately against the 'ugly poison' of discrimination and racism in our government."

Turley explained, "In 1989, the Supreme Court ruled that a minority set-aside program in Virginia was unconstitutional under the Equal Protection Clause. The government cited historical barriers for minority enterprises, but the court balked."

The judge's ruling, Turley explained, "highlights a concern over a variety of state and federal COVID-19 programs enforcing racial and gender criteria. In Oregon, a state COVID-19 program for black businesses, called the Oregon Cares Fund, was challenged by a Mexican-American café owner and others under the Equal Protection Clause. …Other such cases are continuing."

Turley explained, "The question is, when should preference be given over a common resource desperately needed by everyone? For example, the Biden administration and many states gave preferential treatment to minority communities in the allocation of early vaccines; states like Montana and Vermont gave people of color priority in receiving shots. That meant many other citizens had to wait, due to their race, for a vaccine in the middle of a lethal pandemic. Yet, advocates cited greater vaccine 'hesitancy' in minority areas and other historic barriers to medicine as justification.

"The court's concern in the Greer case is that the Biden administration's rationale would allow the use of racially discriminatory policies throughout the government. This is a far more nuanced constitutional issue than past challenges. Rather than impose a quota system or a direct exclusionary policy, Greer and others complain that the government can achieve the same result by prioritizing certain groups in the receipt of benefits," he wrote.

Turley said, "The courts must resolve where to draw this line when limited funds can result in the reduction or denial of government aid based solely on skin color or gender. That fear of a zero-sum game for public aid will deepen our divisions and undermine the worthy unifying theme struck by President Biden in his campaign. Racial discrimination is indeed a 'poison' in our body politic even when done for the best of motivations."

Content created by the WND News Center is available for re-publication without charge to any eligible news publisher that can provide a large audience. For licensing opportunities of our original content, please contact [email protected]ter.org.