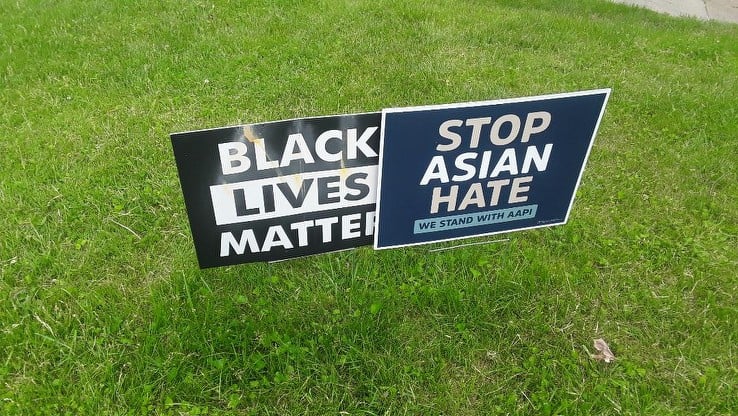 No sooner did Georgia police arrest white guy Robert Aaron Long for the murder of eight people than my woke neighbors posted in their yard a "Stop Asian Hate" sign nestled right next to the "Black Lives Matter" sign.

My neighbors, I am sure, were – and likely still are – unaware of the irony of these twin postings. Wiser souls in the woke movement, however, understand they have opened a Pandora's box on "Asian hate" that was, from their perspective, better left closed.

It turns out, of course, that the folks doing the "hating" are disproportionately the same folks who did the dirty work during the BLM protests.

My neighbors should have known this, but they had long ago chosen to honor their movement's "final, most essential command," and that is, as Orwell forewarned us, "to reject the evidence of their own eyes and ears."

It is hard to say whether black-on-Asian crime has actually spiked. When the rogue Black Muslim operatives known to the police as the "Zebra" killers went on their Bay Area rampage in the 1970s, they shot Asians right along with whites, 21 in all, 14 of them fatally.

In the ensuing decades, these random attacks continued, especially in the Bay Area and in New York City. The media routinely downplayed them, or at least edited the racial element out of the reporting, but today the ubiquitous surveillance videos have made it harder to deny the obvious.

Most journalists, I suspect, were as ignorant as my neighbors when they indulged themselves in the Georgia shooting spree story. Initially, at least, they may have even believed that the statistical spike in hate crimes against Asians was MAGA-driven.

But then again, most journalists initially believed that the sub-zero, downtown Chicago terrorizing of Jussie Smollett was MAGA-driven as well.

If the American media still tiptoe around the phenomenon, the Korean media do not. The headline of a This Week in Asia story cuts right to the chase: "Anti-Asian hate: in South Korea, reports of attacks on Asian-Americans focus on suspects' race – a lot."

The subhead removes all doubt as to which race: "Unlike in the U.S., South Korean media put heavy emphasis on the race of attackers, many of whom were African-American."

The New York Times, by contrast, does Orwell proud. In a lengthy article updated two weeks ago, the Times continued to blame Donald Trump for the attacks and failed to even mention the distinguishing racial feature of the attackers.

Local reporting tends to be more honest than national. If the news stations soft-pedal the racial angle, they at least show the photos and the videos. These images are then shared widely on the internet, and viewers make up their own minds.

This semi-honest local reporting has led to a defensive counter-attack by Big Media. The headline of a recent Newsweek op-ed sums it up: "Stop Blaming Black People for Anti-Asian Hate."

The progressive Pandora now struggles vainly to shove this story line back into her box. Pleads an op-ed by the liberal Brookings Institute, "Why the trope of Black-Asian conflict in the face of anti-Asian violence dismisses solidarity."

Solidarity, however, does not come easily to those who have been gratuitously punched, pushed, hammered, or shot.

Irony abounds in this story. A generation ago Robert Aaron Long would have made the perfect whipping boy for the left, not because of his imagined racism, but because of his very real religious torment.

A southern Gothic straight out of a Flannery O'Connor novel, Long spoke openly and immediately about his own motives. This pastor's son had twice spent time in rehab for sex addiction. He targeted the spas to spare others the "temptation."

With the left having changed its preferred target from the religious right to white supremacists, the media had to shoehorn Long into that paradigm.

Unfortunately, as a born-again white supremacist, Long can expect no more mercy from the system than, say, Derek Chauvin or other victims of this current leftist mania.

To show her commitment to the intersectional cause, Fulton County District Attorney Fani Willis abandoned one of the left's more semi-cherished moral lodestars.

"Last year I told the voters of Fulton County that I could not imagine a circumstance where I would seek [the death penalty],"Willis told the media about the Long prosecution. "Unfortunately, a case has arisen … that I believe warrants the ultimate penalty and we shall seek it."

As the Duchess told Alice, "Everything's got a moral, if only you can find it."

Jack Cashill
Jack Cashill has a Ph.D. from Purdue University in American studies. His lastest book is "Unmasking Obama."
Will a 30-year sentence for Chauvin wake America up?
How long has the FBI been in the terror biz?
Is this Obama's 3rd term? He seems to think so
27 blacks dead at Waco – and Joe defended the killers
Crump, did you tell the prez how you framed George Zimmerman?
See more...