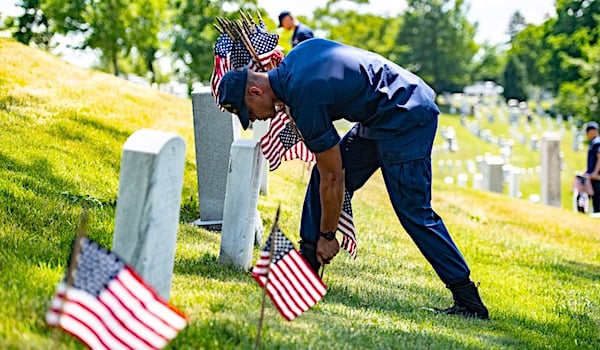 Coast Guardsmen place American flags at headstones in Arlington National Cemetery, Arlington, Virginia, May 27, 2021. The tradition, known as "Flags In," is held annually prior to Memorial Day to honor the nation's fallen veterans. (U.S. Army photo by Elizabeth Fraser)

What a marvelous time of the year. God is dressing up his creation. Light and bright replace the dank and dreary grey of winter. Nature’s cycle of life, that we all love, begins. Coincidentally with the cycle of life begins the cycle of patriotism – the source of life for our nation.

It begins today with Memorial Day when we freshen the graves of our patriots, who sacrificed all the springtimes of their lives, with the flowers of spring. 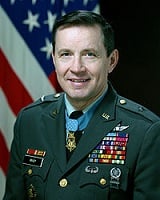 Then Flag Day when we honor the symbol of our sovereignty, our national soul – the physical embodiment of the values embedded in our Constitution.

Then Independence Day when we celebrate the greatest development in the political history of mankind. In between, we remember the pivotal event of this century, D-Day, when the American military tore down the wall of tyranny surrounding Europe.

America has no kings or queens, we have no dukes or duchesses; but we do have a nobility. America’s nobility is its veterans. Their titles range from private to sergeant to general. Or simply … GI. Our premier titles, however, are KIA, WIA and POW.

Unlike other nobilities, these titles are not inherited; they are earned through their bearers’ blood, sweat and tears, the holy trinity that secures our freedom. And their nobility has been the vault for the values of this nation.

They did not take an oath to defend a person, or a party, a king or a dictator – they took an oath to protect and defend the Constitution of the United States – enshrining a set of values.

And that is what veterans would like for us to honor – not just them, but the values for which they gave so much of body and soul, values such as courage, sacrifice and patriotism.

Alexander Solzhenitsyn warned about the danger of a “nation amputating its memory, and of silent generations growing old and dying without ever talking about themselves either to each other or to their descendants.”

And that is why what is most important, indeed vital, is that the youth of today see that we remember, that we are grateful, and that service and sacrifice and courage are noble things.

Our youth should know that we were not all born equal, at least not in terms of ability or opportunity. In fact, there is only one way we are all equal, and that is the thing we admire so much in those we remember.

Only in matters of courage are we all equal; each of us can have all of this we want. God has made this marvelous gift infinitely available to all of us. You can’t use it up.

And it is the source of success in life.

Once our children learn this – that they can have all the courage they want, and that success is based in courage – then mediocrity and failure become choices and have nothing to do with chance, or ability or opportunity.

What is the source of courage? It is faith, another characteristic of those we remember.

In combat, I coped with fear through my faith; my faith was for me a substitute for fear. It was a source of calm, of comfort, and it gave me great confidence. It allowed me to do things that otherwise would have been impossible for me.

Fear is nothing more than our faith on trial. Most veterans do believe, they believe there is something beyond the moment, something worth dying for, Someone above and beyond the self, Who is the source of peace, and peace is the ultimate victory of every warrior.

The faith of our veterans is the source of the courage that gave us the bounty that is America.

This day is also about their sacrifices, best defined as love in action.

In some faiths, there is a doctrine on grace. It teaches that there is a treasure chest filled with grace. And that it was filled by the sacrifices of Jesus and the saints. It's available to all of us to help us as we struggle to do what is right.

We can all draw from that chest through no particular merits of our own, but simply because of God's love for us.

Our freedom is, like grace, a treasure chest. It was filled by the sacrifices of our great heroes and patriots. We all draw from that chest of freedom, often through no merits of our own, but simply because of their love for us.

The chest of grace is inexhaustible because it comes from God. Not so the chest of freedom. It must continuously be replenished by our sacrifices. And that is why it is vital that we remember and revere their sacrifices as we do today.

C.S. Lewis, in his condemnation of moral relativism and a valueless society, wrote about “Men Without Chests.” The chest symbolized the spiritual element, the value center of a person. It was the indispensable connection between the head – the intellectual, the mental element – and the belly, the visceral, emotional, passionate part of our nature.

Balance comes when the head rules the belly thru the chest. Danger comes from people without a chest, from intellectuals without values and human animals governed by passion and instinct alone.

Today, many fear America is in danger of becoming a nation without a chest.

What to do? The answer is simple. We must grow patriots, those who will support and defend America.

I heard a preacher once say that if love is to survive, it must be expressed.

The same is true of patriotism. It needs to be expressed, and we do that by doing patriotic things and honoring patriots, as we do today. Not just veterans, but all the great patriots in our society – teachers, the police, firemen, and especially parents.

We must never forget that the highest form of patriotism is service to our children.

I never tire of telling the story of Webster Anderson, a great black patriot with a chest.

Early one morning in Vietnam, his unit was attacked by communist forces. In the initial attack they pretty much took off both legs. Yet he continued to fight. Later he caught a grenade and it blew off an arm as he tried to throw it clear of his men.

Still, he fought on. I flew in and picked up what was left of Webster after he had inspired his men to defeat the communists. Miraculously, the medics saved his life, but his efforts to save his men cost him both legs and an arm, and earned him the Medal of Honor.

Webster and I became close. He thought I saved his life, but it was really the physicians who did. Some years later we were speaking at a school in Oklahoma.

One of the youngsters asked Webster if he would do what he did again, knowing what it would cost him. Webster’s answer moves me to this day. He raised his good arm and said, “Kid, I only have one arm left, but my country can have it any time they want.”

We need to grow children with chests.

And so, the message this day is to today’s youth, from those who sacrificed their youth that liberty might grow old: Over many years and countless battlefields, over the bodies of millions of dead, a message that the values of courage founded in faith and sacrifice based in love, will lead to an incredible capacity for service to others, and eventually to the security of America.

Our veterans are people with chests, and on Memorial Day they should be puffed out a bit as we remember and are grateful.

Finally, you should know that we veterans did not do our country any favors by our service and sacrifice. God did us a favor by allowing us to be born in America, to be able to serve the great people of America – patriots who make what we did for America, every drop of blood, worth it.