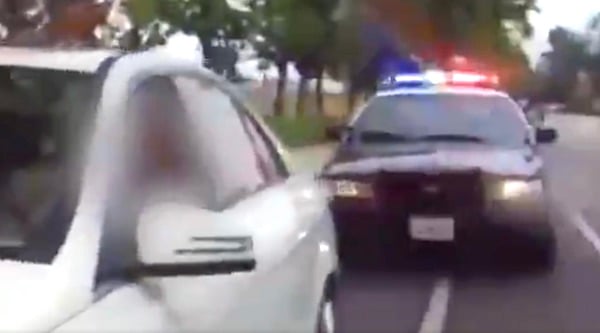 A woman pulled over by a traffic cop in Southern California repeatedly called the officer "a murderer" and launched into a racist rant against Mexicans, all recorded on the policeman's personal bodycam.

The woman driving a Mercedes-Benz told the deputy with the Los Angeles County Sheriff's Department she "mistakenly" left her driver's license at home and appeared confrontational from the start of her interaction with the officer, as she was recording him on her own cell phone as well.

"Can you call your supervisor, please?" she asked.

"I already did, he's on his way," the officer responded.

"Good, 'cause you're a murderer," she said. "You scared me and made me think you were gonna murder me."

"Well, it's not just a feeling. You're a murderer. ... You're threatening to kill me and my son."

"I'm perfectly legal, and I'm a teacher. So there!" the woman proudly declared.

"Congratulations," the deputy responded. "Is this your car?"

"Yes it is. Are you trying to say I stole my own car because you're jealous? Is that what that's about?" The woman responded.

NEW: "You're always gonna be a Mexican, you'll never be white, you know that?"
A Latino LASD deputy sent me his bodycam video of a woman claiming to be a teacher launching into a racist tirade against him when he pulled her over in San Dimas. She repeatedly calls him a murderer. pic.twitter.com/Cc8jSVenCQ

Fox News correspondent Bill Melugin tweeted Monday evening: "LASD tells me the woman called them after this traffic stop to file a harassment complaint against the deputy with internal affairs. San Dimas station doesn't have official bodycams yet, the deputy tells me he invested in his own personal cam to protect himself on the job."

"LASD also tells me the woman has a history of making false complaints against deputies. I've learned what her name is, and she has been a professor at schools in the LA area, but at this time, I will not be identifying her because she has not returned any of my calls or emails."

Sheriff Alex Villanueva told Melugin that he commended the deputy for remaining calm throughout the interaction.

"This Deputy exemplifies the core values of our Department, his demeanor during this traffic stop is just an example of professionalism and patience our @LASDHQ Deputies have," Villanueva tweeted.