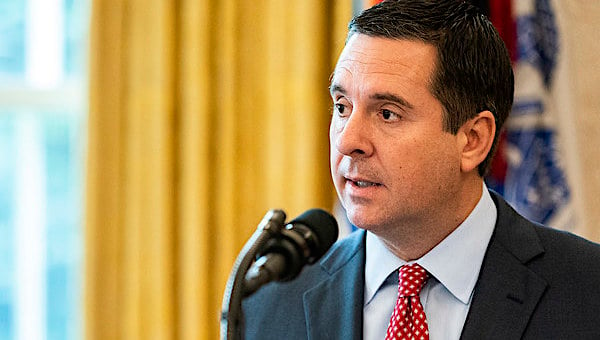 Democrats running the U.S. Capitol building have refused to let Republicans see the video documentation of what happened there on Jan. 6, according to Rep. Devin Nunes, R-Calif.

That's when President Trump held a rally in the morning, and late in the rally and during the afternoon multiple people vandalized parts of the building.

Some video that has been released shows people walking into the building, while other clips show some individuals breaking windows and entering.

Democrats launched their second impeach-and-remove agenda against President Trump over the vandalism, but it failed, just like the first campaign a year earlier.

Now there are commentators who have likened the day's events, in which one person, a Trump supporter, was killed by a police officer, to the 9/11 calamity in which Muslim terrorists hijacked four jetliners and crashed them, killing nearly 3,000 people.

The Gateway Pundit reported on Nunes' comments during an interview with Greg Kelly on The Kelly File.

Hundreds of people have been charged over the Jan. 6 damage, and authorities confirm many of them remain in jail even now, having been denied bail for charges like obstructing and vandalism.

"Tell me how many people actually carried a hammer, broke windows, or aided and abetted those people that destroyed federal property?" he said. "Why won't you show us the videotapes? Republicans have yet to see the videotapes of what happened on January 6. Why are they not showing us the videotapes and why don't we know who broke the windows and damaged public property?

"Because I tell you, I am all for those people who broke windows to going to jail for a long time. But what I'm not for is for people sitting in jail, like I understand, there is very few people reporting on this right now, but what I understand there are people who are sitting in jail right now who are having their due process rights violated. I talked to a lot of people who said, 'Hey, we didn’t even know we couldn’t be in the Capitol.'"

Much of the video that has been released shows people milling about, in front of security officers, much like in a shopping mall. Authorities have admitted that no weapons were confiscated from any of those who were in the Capitol that day.

One sarcastic video, posted with an accompanying sound track, came from the family of Ashli Babbitt, the lone victim of a policeman's bullet on that day.

I love to go a wandering.... pic.twitter.com/L299IrcZwi

Nunes noted people have a right to be in their Capitol, and at least some "doors were wide open."