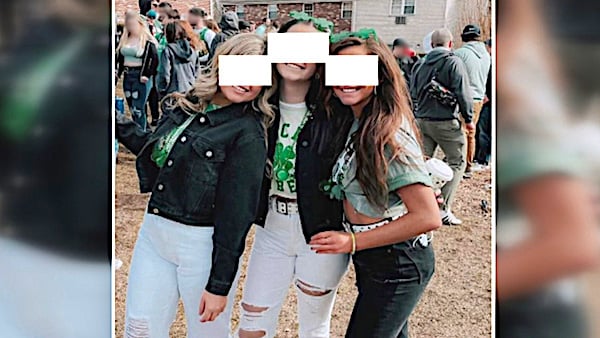 Three female students were suspended by the Uversity of Massachusetts-Amherst after being photographed without masks at an off-campus event. (Video screenshot)

The parents of three students expelled from the University of Massachusetts at Amherst for violating a mask requirement while off-campus are threatening to sue.

The school threw the three girls out of their housing and their classes, banned them from their final exams, and kept the $16,000 each set of parents had paid for the semester.

The punishment came because the girls were seen in an online photo outside at an unidentified, off-campus event, without masks.

Mask-wearing across the United States actually has been one of the more volatile disputes that came of the COVID-19 pandemic that got its launch in China.

Colleges have done just about the same, with some requiring masks, and others canceling their demands.

The situation at the UMass-Amherst was that officials said the campus was seeing an uptick in cases, so students were ordered to lock down, wear masks and more.

The Washington Post reported the families now are deciding how to challenge the school's heavy-handed actions, and they cite recent images of the school's hockey team celebrating, outdoors and without masks, as evidence of the school's double standard.

"These beautiful young ladies who are honors students have had a full academic year stripped away and their paths broken of their higher education for alleged COVID violations," one of the parents told WCVB-TV.

The report confirmed the families have hired a lawyer and are planning a lawsuit.

The university charged that the students over and over were warned of the school's rules and regulations regarding COVID.

A school official released a statement that said: "Expectations regarding students' responsibility to follow public health protocols, and the consequences for failing to do so, were clearly communicated to students before and throughout the spring semester, and students were updated regularly as conditions changed."

The school ordered students to "self-sequester" in February, where they were not allowed to leave their dorm rooms or homes "except to get meals."

Then officials noted the virus rates had fallen and on-campus activities would resume.

But officials had to call police in March to "disperse" a crowd of students that had gathered, and citations were issued.

According to Fox, the parents came on "Fox & Friends" and called the punishment "draconian" and "complete overkill."

One of the mothers, identified only as Betsy, said the school's retaliation against the three students had "devastated" her daughter, to the point she does not want to return to the school at all.