Amid constant Hamas rocket-fire from Gaza, Israeli leaders are describing attacks by Arab mobs in Jewish-Arab cities across Israel as "pogroms" reminiscent of the Kristallnacht attacks across Nazi Germany in 1938.

"The sight of the pogrom in Lod and the disturbances across the country by an incited and bloodthirsty Arab mob ... is unforgivable," said Israeli President Reuven Rivlin in remarks to the nation.

Arab residents of Lod, a mixed Arab-Jewish city near Israel's international airport, have torched hundreds of cars and forced Jewish families to leave their homes with police escorts. Three synagogues and several Jewish-owned shops were burned.

The city's mayor, Yair Revivo, compared the violence to the Nazi Kristallnacht pogroms.

"Civil war has broken out in Lod," he said.

On Thursday in Lod, a Jewish man was stabbed by a mob of Arab Israelis shouting "Allahu Akbar" – meaning Allah is above all other gods –  amid continued unrest and looting.

Rivlin, known for his efforts to improve Arab-Jewish ties in Israel, said the "silence of the Arab leadership about these disturbances is shameful, giving support to terrorism and rioting and encouraging the rupture of the society in which we live and in which we will continue to live once all this has passed."

In an interview with Israel's Channel 12 News, Rivlin said there is a "complete loss of control."

"Synagogues are being burned. Hundreds of cars set alight," he said. " ... The situation is incendiary."

On Monday night, Arab terrorists in #Lod launched a violent pogrom in the city and shamelessly tore down Israeli flags.

Last night, we organized a demonstration in solidarity with the citizens of Lod and restored our flag and pride to the city. pic.twitter.com/iETEJRHi9C

The more than 1,700 rocket attacks on Israel civilians by Hamas since the weekend are predicated on false claims, contends Aaron Klein, a former WND bureau chief in Jerusalem who now is a strategic adviser for Israeli Prime Minister Benjamin Netanyahu.

"The explosion of violence in recent days is not about a real estate dispute in Jerusalem nor recycled, mythical Israeli threats to the Al-Aqsa Mosque," he wrote in a commentary for Newsweek.

"The escalation is rooted in a decision by Palestinian Authority president Mahmoud Abbas to unilaterally cancel next month's parliamentary elections in which Hamas was expected to do quite well," he said. "Abbas's decision, which he conveniently blamed on Israel, also likely postpones his own presidential election, tentatively scheduled for July."

Hamas, attempting to "set the Palestinian arena ablaze," aims "to solidify its own domestic position ahead of any election and to present itself as the savior of the Palestinian cause."

One of the lies, Klein said, is that the violence is a popular reaction to a legal dispute that could result in the eviction of dozens of Palestinians living in Jerusalem's Sheikh Jarrah neighborhood, next to a popular Jewish holy site.

"Hamas and the PA went into overdrive inciting hostility against Israel over the matter," he wrote.

Klein argued that Israel's "fiercely independent judiciary" ruled in favor of the claimants on behalf of the original Jewish owners, and the case was slated to be reviewed by Israel's supreme court, also known for its independence.

Palestinians were housed there by Jordan in the 1950s while it occupied eastern Jerusalem, he pointed out. The neighborhood was Jewish until Jews had to flee Arab pogroms during the British mandatory government prior to Israel's 1948 War of Independence.

Then, Hamas for weeks has been "ginning up an Israeli threat to the Al-Aqsa Mosque, a libel so overused it is surprising that anyone takes it seriously anymore."

"Israel guarantees freedom of worship for all religions—unlike any of its neighbors, the Palestinian Authority and of course Hamas," he said.

Israeli police were forced to act when Palestinian extremists themselves created a threat to Al-Aqsa by organizing riots in the area and agitating protesters to attack Israeli civilians and security forces.

The Israel Defense Forces distributed a tweet with video of a Hamas rocket aimed at Israel misfiring and falling back into Gaza. A total of 350 rocketes have misfired in the last three days, resulting in the deaths of Gazan civilians.

WATCH as a Hamas rocket aimed at Israel misfires and falls back into Gaza.

But this isn't the 1st time—Hamas misfired 350 rockets in the last 3 days.

These rockets result in the deaths of innocent Gazan civilians.

It's time for the world to hold Hamas accountable. pic.twitter.com/vmhmXTZrl6

A video from Gaza showed portable rocket-launchers being driven through a narrow street in a Gaza neighborhood, documenting that Hama uses Palestinians as "human shields" for their weapons.

Hamas uses Palestinians as human shields for their terrorist weapons. This puts innocent lives in grave danger. We Palestinians are not pawns, stop threatening the lives of my Palestinian brothers and sisters to protect your rockets. pic.twitter.com/84nWpqy6h3

'Destruction' of Jews 'has arrived'

A Hamas leader in Gaza is seen in a video posted by the Middle East Media Research Institute urging Arabs to buy a five-shekel knife to cut off the head of a Jew, according to a MEMRI translation

"People of Jerusalem, we want you to cut off the heads of Jews with knives. With your hand, cut their artery from here," he instructed, pointing to his neck. "A knife costs five shekels. Buy a knife, sharpen it, put it here (on the neck) and just cut off their heads."

He made it clear that it's about Islam and its doctrines regarding Jews and Christians.

"You shall find the strongest enmity towards believers to be the Jews and the polytheists," he said, referring to Christians.

"The Jews have spread corruption and have acted with arrogance, and their moment of reckoning has come," he said.

"The moment of their destruction at your hands has arrived."

The Hamas charter states that the terrorist organization's reason for existence is to help bring about the destruction of Israel.

This clip shows Hamas' true colors: a bloodthirsty terrorist organization urging Arabs to "buy a knife for 5 shekels & slit the throat of a Jew." We can't allow this appalling hate speech to undermine the delicate fabric of Jewish-Arab co-existence in #Israel pic.twitter.com/bjagYETBvV

Biden has undermined Israel, he said, with moves such as seeking to reenter the Iran nuclear deal and restoring aid to the Palestinians.

"The conflict we are seeing is the direct result of the tragic mistakes of the Biden foreign policy," Cruz said. "And when you are ambiguous, when you are agonizing, when you undermine our support for Israel, what happens is it encourages the terrorists who attack and launch the kind of missile and rocket attacks we’re seeing right now."

The Defense and State departments were opposed to moving the U.S. Embassy from Tel Aviv to Jerusalem, Cruz noted, but Trump's decision to do so in 2017 "made clear to our friends and our enemies that we stand unshakably with Israel."

A 'test' Biden has failed

Some Israeli analysts claimed Wednesday that President Biden's policies have contributed to the hostilities in Israel and Gaza, the Jerusalem Post reported

The escalation "is a test and [Biden] has failed," said Prof. Eytan Gilboa, an expert on US policy in the Middle East at Bar-Ilan University. 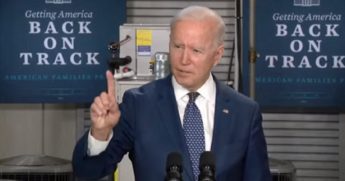 The mistakes began in February, he said, with Biden's lifting of the designation of the Iranian-backed Houthis in Yemen as a global terrorist organization.

"If you are a terrorist organization, and you don’t do anything and sanctions are lifted against you, this means you can do whatever you want," Gilboa said. "Other terrorist organizations in the Middle East, like Hamas, look at this and say, ‘This is what the US is doing? Very good. We can exploit it.'"

In April, Biden announced the U.S. would restore $235 million in aid to the Palestinians that had been withdrawn by President Trump. The Post noted that about two-thirds of the money goes to the United Nations Relief and Works Agency, which Trump cut off in 2018 because of its ties to terrorism.

The Biden administration also lifted sanctions, without any conditions, on International Criminal Court prosecutor Fatou Bensouda, who had investigated Israel for alleged war crimes in Gaza.

The new administration also has equated Israel with Hamas and Islamic Jihad. Without mentioning that the latter are terrorist organizations, State Department spokesman Ned Price said Tuesday the U.S. urgers "de-escalation on all sides."

"The U.S. is strengthening terrorist organizations who are against peace," Gilboa said.

Then there's the effort to reenter the nuclear deal with Iran, which funds Hamas.

More than 40 senators have written to Biden demanding an end to the Iran nuclear talks because of the Hamas funding, Newsweek reported.

"The United States engaging in active negotiations with Iran and potentially providing billions of dollars in sanctions relief will no doubt contribute to Iran's support of Hamas and other terrorist organizations who attack Americans and our allies," the senators said in a letter Tuesday. "We call on you to immediately end negotiations with Iran, and make clear that sanctions relief will not be provided."

On the same day the letter was issued, Abbas Araghchi, Iran's deputy foreign minister, said the U.S. must "verifiably" lift sanctions imposed on the Islamic regime if it wants to "return to full implementation" of the agreement.

Democrats retreat from support for Israel

Meanwhile, some Democrats in Congress who have been unequivocal in their support for Israel are blaming both the Jewish state and Hamas for the current conflict, reports the Jewish Telegraph Agency.

The Jewish lawmaker said the attacks on Israeli civilians "amount to murderous provocations by a terrorist regime which refuses to recognize Israel’s right to exist, and which refuses to work toward a peaceful coexistence for both sides."

But this week, while beginning with a condemnation of Hamas, Nadler said he remains "deeply concerned by the violence in Jerusalem, including Israeli police violence, and I urge all parties to exercise restraints."