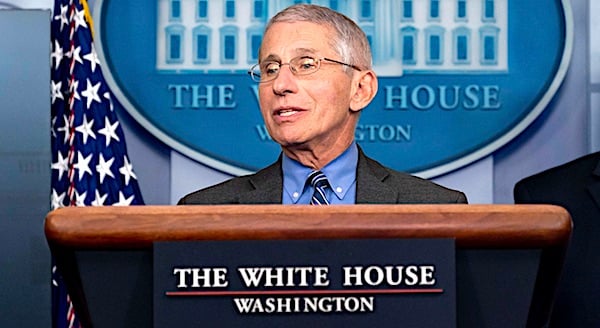 Sen. Rand Paul said Thursday morning that while there's no hard proof yet regarding the origin of the COVID-19 pandemic, it's becoming clearer that Dr. Anthony Fauci "could be culpable for the entire pandemic."

In an interview with "Fox & Friends," the Republican senator pointed out that the sole U.S. representative of the World Health Organization team investigating the origin of the pandemic was Peter Daszak of EcoHealth Alliance.

His organization was the recipient of funds from the National Institutes of Health to conduct research on bat coronaviruses at the Wuhan Institute of Virology, which is emerging as the likely origin of the pandemic.

"So NIH gave the money to EcoHealth ... and the head of EcoHealth – they got him to investigate whether Wuhan was doing anything inappropriate in their lab," Paul said.

"But if they were, then wouldn’t he be culpable?" the Kentucky lawmaker asked. "Doesn’t he have a self-interest in smoothing things over?"

Ultimately, however, Paul said, there's someone else who bears more responsibility.

"Dr. Fauci could be culpable for the entire pandemic," he said.

On Tuesday, Paul confronted Fauci with the increasingly plausible lab-leak theory of the origin of the novel coronavirus, asking him directly if the NIH funded dangerous "gain-of-function" research at the Wuhan Institute of Virology. Fauci declared "the NIH and NIAID categorically has not funded gain-of-function research to be conducted in the Wuhan Institute." The risky research increases the virulence and transmissiblity of viruses to prepare vaccines and treatments in case of an outbreak.

What is clear is that NIH and the branch Fauci has directed since 1984, the National Institute for Allergies and Infectious Diseases (NIAID), provided funding to the Wuhan lab.

The question is whether or not that research was "gain-of-function," for which the U.S. temporarily banned funding in 2014.

Paul points to a review of Shi's paper by MIT biologist Kevin Esvelt that concluded "certain techniques that the researchers used seemed to meet the definition of gain-of-function."

In May 2017, Americans scientists who had received grants from Fauci's NIAID headlined a conference hosted by the Wuhan lab focusing on "gain of function research and gene editing," the National Pulse reported Wednesday.

In an interview with "Montana Talks" on KBUL-AM in Billings, he said the experiments funded by the NIH appear to meet the definition of gain of function.

"I was just perplexed," he said of Fauci's testimony. "It just seems clear that these experiments would have enhanced the virulence of a natural pathogen. And that's the definition of gaining function, it is very broad.

"So how Fauci can say he didn't fund such work is a puzzle to me," he said.

WND reported Wade wrote a lengthy analysis of the origin of the pandemic in which he concluded that while hard proof is lacking -- due largely to China blocking access -- the available evidence overwhelmingly points to a leak from the Wuhan lab.

Former CBS News ingestigative report Sharyl Attkisson noted the U.S. temporarily halted gain-of-function research in 2014 because of its obvious dangers. But an exception was made for the research on bat coronaviruses by the Wuhan lab's Dr. Shi Zhengli and Dr. Ralph Baric of the University of North Carolina.

The work was "reviewed and approved" for "continued study" by the National Institutes for Health.

But Attkisson points out the NIH not only approved it, it helped pay for it with six grants of U.S. taxpayer funds, including from Fauci's NIAID.

And more money was funneled through Daszak's EcoHealth Alliance.

Baric's work centered on genetically manipulating cornaviruses, in part to allow for development of vaccines and therapeutics

Baric and Daszak teamed up with Shi to engineer genetic hybrids of bat coronaviruses, successfully getting them to infect human airway cells grafted in mice.

In the "Fox & Friends" interview Thursday, Paul slammed establishment media for not asking Fauci the right questions about the origins of the virus and research funding.

"If [Fauci] was being interviewed by a journalist they would have asked, ‘Did the NIH, did your specific division of the NIH, give money to the Wuhan lab?" Paul said.

Fauci commented earlier Thursday on "CBS This Morning" on his exchange with Paul.

"I just don’t want to get into that tit for tat," he said. "I just don't understand what the problem is with him. I’m just going to do my job and he can do what he wants to do and we'll see what happens."