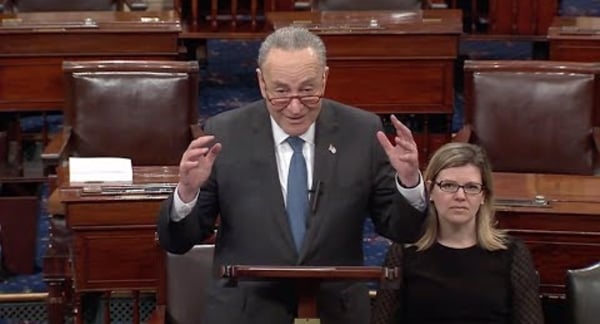 Republicans in the U.S. Senate on Friday blocked a Democrat plan to set up a special commission to investigate events in Washington on January 6, successfully using the body's filibuster rule that requires support from 60 senators to advance legislation.

There were six "rebels" in the GOP who voted along with Democrats for the plan that would set up a commission to issue a report on the January 6 events that left the U.S. Capitol vandalized.

The Democrats assembled 54 votes but that was short of the 60 needed, and 35 senators voted against the idea.

Sen. Chuck Schumer, D-N.Y., erupted in what the Daily Mail described as an act of rage afterward, condemning the GOP with, "Shame on the Republican Party for trying to sweep the horrors of that day under the rug because they're afraid of Donald Trump."

That particular plan essentially died with the vote, even though Democrats may adopt other investigative procedures and some already have begun in various Senate committees.

House Speaker Nancy Pelosi, who orchestrated her second failed impeach-and-remove strategy against President Trump based on the events that day, accused the Republicans of denying "the truth of the January 6th insurrection…"

The commission was viewed by some as just another way for Democrats to lash out at President Trump, even though during a rally that same day, he encouraged his followers to protest "peacefully."

"Chaos" in the Senate on Thursday had prevented a vote then. The Mail reported the Senate was in session until nearly 3 a.m. Friday because of arguments over a separate bill, which was aimed at making the U.S. more competitive against China.

Schumer has told Republicans they needed to support what he wanted.

"Our democracy, our beautiful, more than two-century old democracy is more at risk because of the lies that have been perpetrated by Donald Trump and his allies than it has in a very long time," he said.

Those "lies" are statements made by Trump and his supporters about evidence of election fraud during the 2020 presidential race. Multiple states continue to review what actually happened there, after Joe Biden was certified the winner by only a few thousands of votes in a handful of states.

There were several scenarios that critics have said need to be investigated, including undue influence on the results from a $400 million donation to local election officials from leftist Mark Zuckerberg as well as the fact that elections officials several times arbitrarily changed state law regarding elections during their counts.

Senate Minority Leader Mitch McConnell explained that the commission would not uncover new facts or promote healing because it was not "designed to do that."

He said the proposal was "rigged and partisan."

McConnell said he'd urge other senators to oppose what he called an "extraneous layer." And there were reports McConnell noted the Democrat report produced by such a commission could come out during the height of the 2022 election season, during which the GOP is expected to retake the majorities in the Senate and House.

Even Schumer admitted that more than half of the Republicans in the nation still believe the election was rigged "and Joe Biden isn't the real president."