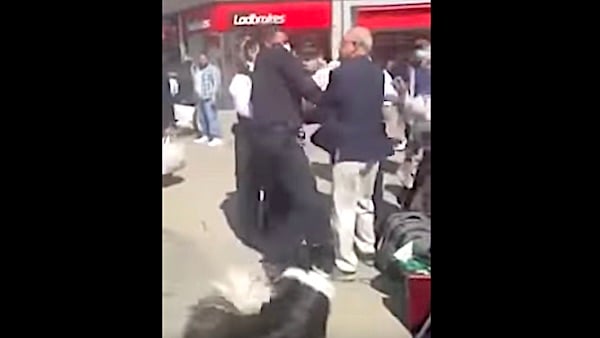 Pastor John Sherwood being arrested in west London, England for preaching what police say was an 'offensive' message from the Bible on April 23, 2021. (Video screenshot)

Disturbing video has emerged of a Christian pastor forcefully arrested and frogmarched by police officers merely for preaching a basic message from the Bible in public.

The incident took place April 23 in west London, England, as John Sherwood, a 71-year-old grandfather, was standing on a step stool in the Uxbridge section of town, voicing a message from Genesis about God having created a man and woman in Genesis, and that being the basis of the family unit.

Britain's Daily Mail reported: "Police said they had received complaints the man had been making 'allegedly homophobic comments' and arrested him under the Public Order Act, which can be used under the vague proviso that someone is using 'abusive or insulting words' that cause 'harm' to someone else. He was later released without charge."

Sherwood was held overnight by police, and though no immediate charged was pressed, a file was passed to the Crown Prosecution Service for review.

A member of the public had flagged down officers and claimed Sherwood was making homophobic comments, according to the Metropolitan Police.

Sherwood, a veteran minister of 35 years who now preaches at an independent evangelical church in north London, told the Mail: "I wasn't making any homophobic comments, I was just defining marriage as a relationship between a man and a woman. I was only saying what the Bible says – I wasn't wanting to hurt anyone or cause offense.

"I was doing what my job description says, which is to preach the gospel in open air as well as in a church building.

"When the police approached me, I explained that I was exercising my religious liberty and my conscience. I was forcibly pulled down from the steps and suffered some injury to my wrist and to my elbow. I do believe I was treated shamefully. It should never have happened." 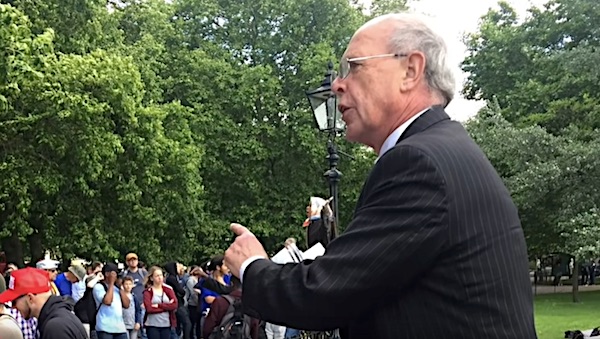 The married father of two says officers grilled him about homosexuality, going so far as to ask what he would do if his own children were gay.

"The question was irrelevant to the allegation against me," he explained. "I said I would seek to bring them to Christ, but of course I would love them no matter what, because they're my children."

Women can be heard shouting to the officers "You're on camera!" and "This is a Christian country" during the arrest.

A woman's voice is also heard saying, "For a man preaching about Christianity, look at how he's ripping him."

Sherwood's supporters posted a statement online noting: "Whilst he was preaching, he expounded the final verses of Genesis 1, declaring that God's purpose in creating mankind was to set human beings in families, headed by a father and a mother, not by two fathers, or by two mothers.

"The distinction within mankind of just two genders, male and female, made in the image of God, constitutes the essence of God's created order."

Christian Concern chief executive Andrea Williams said police needed greater understanding of the law on freedom of religion and speech, telling the Mail: "There is an idea that if people are offended you should arrest someone, but in this country we also have freedom of speech."

Police say their directorate of professional standards reviewed the footage of Sherwood's arrest and found no misconduct by officers on scene.

Peter Simpson, a pastor at Penn Free Methodist Church in Buckinghamshire, was preaching with Sherwood before the arrest, and told the Mail: "Everything he said was Bible based. He was not saying anything abusive; he is a Christian minister. There did not seem to be any recognition from the police that Christian ministers and such views exist.

"If there was a [gay] Pride parade in Uxbridge, the police would support it even if Christians were offended. You don't have to be an evangelical Christian to be shocked by this. Anyone who cares about liberty should be concerned about what happened in Uxbridge.

"This is about defending our Christian civilization, or what is left of it. The belief in Genesis 1:27 is fundamental to Christian belief.

"This arrest of a faithful minister for doing nothing other than declaring what the Bible teaches about one of the important moral issues of our time reveals a dangerous assault upon freedom of speech and, not least, upon the freedom of Christian pastors to declare in public all that the Bible teaches. The state has no right to designate that some parts of God's word are no-go areas.

'Whatever one's personal views on homosexuality might be, it is surely pertinent to ask what kind of nation have we become that the minister of a Christian church is arrested for upholding in the public square the very truths which Her Majesty the Queen promised to uphold in her Coronation Oath in 1953, with a Bible in her hand?"