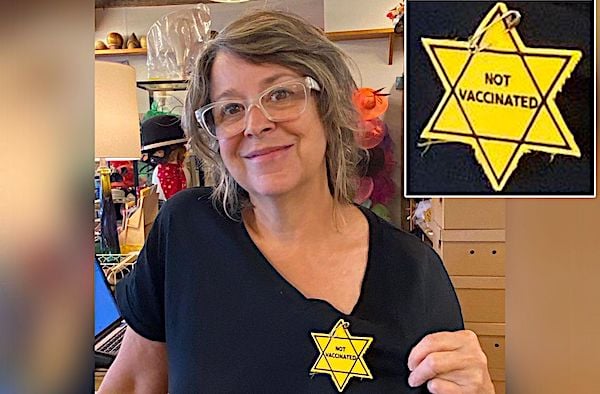 A woman sports a Star of David with the messages 'Not Vaccinated' at a hat shop in Nashville. Tennessee, in May 2021. (Twitter)

A Nashville hat shop that sported yellow patches resembling the Star of David with “NOT VACCINATED” across the front was met with widespread backlash and lost revenue.

“Stetson condemns antisemitism and discrimination of any kind,” the company said in a statement. “As a result of the offensive content and opinions shared by HatWRKS in Nashville, Stetson and our distribution partners will cease the sale of all Stetson products.”

Goorin Bros. owner and president, Ben Goorin, said in an Instagram post: “Due to the recent offensive content shared by Hatwrks in Nashville, Goorin Bros. has ended their distribution with this business effective immediately.”

“The Jewish badge was a key element used by Nazis beginning in 1939 who planned to persecute and eventually murder millions of Jews,” he continued. “To make a mockery of the Holocaust in any form is unacceptable and completely insensitive.”

The company’s owner apologized on Instagram on Saturday for showing off the Holocaust-referencing merchandise.

“In NO WAY did i intend to trivialize the Star of David or disrespect what happened to millions of people,” she wrote. “My hope was to share my genuine concern & fear, and to do all that i can to make sure that nothing like that ever happens again.”

After the post, however, another went up saying that it has fought against “government overreach” and “group think” while “trying to find reason in a sea of irrational.”

“[W]as the use of the yellow star an insensitivity? obviously so to many, but does that make me an anti-semite nazi? NO, NO IT DOESN’T,” the post said.

Protesters gathered outside the store over the weekend, with some singing that they did not want HatWORKS hats or hate.

The controversy comes amid a spike in anti-Semitic crimes across the United States, and after Georgia Republican Rep. Marjorie Taylor Greene compared mask usage to the treatment of Jews during Holocaust. Her remarks were condemned by House GOP leadership, including Minority Leader Kevin McCarthy, who called her “intentional decision” “appalling.”

“The Holocaust is the greatest atrocity committed in history. The fact that this needs to be stated today is deeply troubling,” he said.