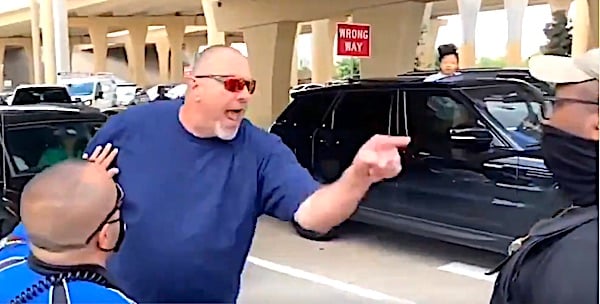 An angry man tries to get leftist protesters off the street so traffic can get through in Plano, Texas. (Video screenshot)

Texas Attorney General Ken Paxton has issued a statement condemning the police chief in Plano for allowing an "Antifa-like" mob to block a public road and hinder traffic – without any consequences whatsoever.

The chief said in a statement that people need to understand what was going on, that a mass arrest of protesters was "not going to happen," and he needs to "negotiate" with them.

The chief's actions drew the scorn of social media when a video revealed that a police officer appeared to be doing nothing to disperse the mob and remove them from the street blockade.

Then, when one irate motorist confronted both the mob and the police officer he was told to go away. Further, he then was charged for slapping away the hand of a woman who had stuck her arm up at him.

And a mob member who drew a weapon was given a pass, because the police chief said it was a pepper ball gun, then a taser, then an "electronic control device."

See the statement from Paxton, as well as a video. (Be forewarned of offensive language in the video):

And here's the explanation from Ed Drain, the chief of police:

Paxton wrote that it appeared that "lawlessness" already has taken hold in Plano, "thanks to a group of radical-left armed agitators and a police chief unwilling to enforce the law."

He explained when one man got out of his car to demand the mob move out of the way of traffic, "an Antifa-like character pulled what appears to be a gun and pointed it at the man."

Paxton said he had his staff contact Plano's police directly, and found it actually was worse.

He described how the chief took the "rioters' side."

Paxton said the state needs law enforcement officers to be ready and willing to uphold law and order.

BizPacReview explained Paxton stated, "I will never allow our beautiful Texas cities and neighborhoods to become Portland or Seattle or San Francisco because of the unchecked left. I call upon my friends and allies across the state to crack down on this lawlessness immediately. No excuses!"

Paxton also pointed out that the motorist, the only person charged with anything because of the confrontation, only "slapped a person's hand out of his face."

The report noted that Drain previously had marched alongside racial justice protesters in his city last June.

Here’s Plano’s Chief of Police Ed Drain marching with BLM on roads he shut down for them last year pic.twitter.com/MYGAvQk6Vz

Plano police confirmed the standoff developed on May 2 and the department's statement lamented "so many people have falsely reported on this incident."