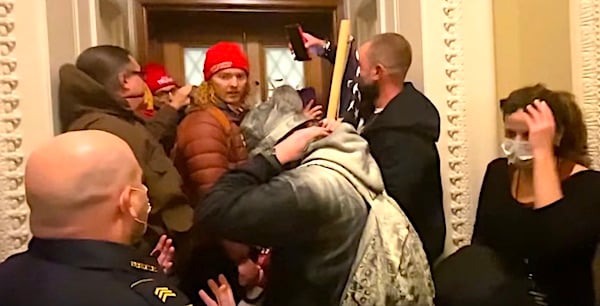 Constitutional expert Jonathan Turley, a law professor at George Washington University and a frequent guest commentator on network television, is warning about a move from a Democrat in Congress to censure three GOP colleagues for their "opposing view."

The issue is the Jan. 6 violence at the U.S. Capitol, which happened during and after a rally speech given by President Trump. Dozens, perhaps hundreds, of protesters entered the building, and a handful vandalized various locations. There were several deaths from natural causes, including one officer, but the only shot fired in anger was by a police officer who killed an unarmed protester.

Democrats, insisting on demonizing Trump's encouragement to his crowd to go and protest "peacefully," insist it was an "insurrection" intent on the overthrow of the government.

Republican members of Congress have characterized it as a riot, as violence, and in other terms. So U.S. Rep. David Cicilline, D-R.I., has introduced a measure to censure three specific Republicans who have refused to adopt his own definition that the events constituted "insurrection."

"The Cicilline resolution should be condemned by members of both parties as an abusive legislative authority and inimical to the legislative process," Turley noted. "He would open a Pandora's Box of politically retaliatory measures that would see no end in our age of rage.

"There remain members on both sides who continue to fuel our divisions and capitalize on our tragedies for political purposes. No party owns the rights to Jan. 6th or the national pain caused by the attack. It remains an open wound for our nation as a whole," he said. "We will continue to debate the causes and the characterization of that attack on Congress. However, members cannot dictate how others reference or interpret these events."

Turley explained that Cicilline's attack is on those "who have the temerity to disagree with his view of the election or the riot."

Cicilline is targeting Republican Reps. Andrew Clyde of Georgia, Jody Hice of Georgia and Paul Gosar of Arizona. He charged, "The members who testified that January 6th was 'not an insurrection' and undermined the damage that was done put their own political agendas above their country. In doing so, they recklessly disregarded the future harm they could cause by legitimizing a violent attack on our democratic institutions – a conscious and harmful decision calling into question their dedication to their role as representatives."

Turley pointed that, "The obvious problem is that rejecting the term 'insurrection' is not 'legitimizing a violent attack.' Many of us refer to the violence as a 'riot' because it makes fewer assumptions as to the motivations of all of those present. It is not to downplay the violence or its implications for our country. I condemned Donald Trump's speech while he was still giving it and condemned the violence as it was unfolding. However, there were thousands of people at the protest and most were not violent and did not enter the Capitol."

Further, he said, "The most important point is that people of good faith can differ on how to characterize or understand what occurred on January 6th while still condemning the violence."

Turley said Cicilline simply is "seeking to punish colleagues for holding an opposing view of what occurred on that day."

He noted that Cicilline, in support of his argument, cited the expulsion of 17 members of Congress during the Civil War.

Those members were those who left Washington at the time to join the South in the Civil War.

"Those were members who supported a civil war that costs hundreds of thousands of lives," Turley said. "Cicilline sees no distinction with colleagues who condemned the violence but characterized it as a riot rather than an insurrection."

Media personalities previously have taken the same tone as Cicilline.

In fact, ABC's George Stephanopoulos berated Sen. Rand Paul, R-Ky., with, "No election is perfect. But there were 86 challenges filed by President Trump and his allies in court, all were dismissed. Every state certified the results. Can't you just say the words, this election was not stolen?"

The senator pointed out at that time that the problems simply weren't addressed.

"There were lots of problems and there were secretaries of state, who illegally changed the law and that needs to be fixed, and I'm going to work harder to fix it and I will not be cowed by people saying 'Oh, you're a liar,'" Paul told the anchor.

"Let's talk about the specifics of it. In Wisconsin, tens of thousands of absentee votes had only the name on them and no address. Historically, those were thrown out. This time they weren't. They made special accommodations 'cause they said, 'Oh, it's a pandemic and people forgot what their address was.'"

The senator then doubled down.

The Washington Times said Paul, in an event held by the Heritage Foundation, said it was simply "untrue" that "the courts fully heard this."

He pointed out, "Courts have been hesitant to get involved in elections."

But when issues like state officials making "changes to election law without permission from the state legislatures" arise, they need to be taking a role.

Paul said states now need election laws that specifically say a secretary of state can’t mail ballots out or make unilateral changes if the law doesn’t expressly give them power to do so.

According to the Washington Examiner, the facts are that "many state officials made changes to election laws, citing the safety of voters. Widespread use of mail-in balloting was encouraged in many areas of the country, while deadlines for mail-in ballots were extended, oftentimes without input from state lawmakers."

The report noted that even the Supreme Court refused to hear a challenge to arbitrary changes made by state officials in Pennsylvania for the election, a political move that drew Justice Clarence Thomas's reaction.

"One wonders what the court waits for," he charged. "We failed to settle this dispute before the election, and thus provide clear rules. Now we again fail to provide clear rules for future elections. The decision to leave election law hidden beneath a shroud of doubt is baffling. By doing nothing, we invite further confusion and erosion of voter confidence. Our fellow citizens deserve better and expect more of us…"