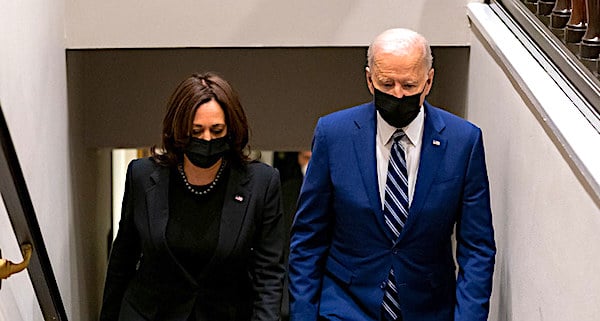 President Joe Biden and Vice President Kamala walk up the stairs in the West Wing of the White House Monday, March 29, 2021, following the president's remarks in the South Court Auditorium in the Eisenhower Executive Office Building at the White House. (Official White House photo by Cameron Smith)

In London for the G7 summit of foreign ministers, U.S. Secretary of State Antony Blinken declared the Biden administration is not seeking to "contain China."

"It is not our purpose to try to contain China or to hold China down," Blinken said Monday during a joint news conference with U.K. Foreign Secretary Dominic Raab.

Secretary of State Antony Blinken in a news conference in London with U.K. Foreign Secretary Dominic Raab on May 23, 2021 (Video screenshot)

"What we are trying to do is to uphold the international, rules-based order that our countries have invested so much in over so many decades to the benefit, I would argue, of not just our own citizens but of people around the world. Including, by the way, China," he said.

On Monday, a leading foreign- policy Senate Republican warned that China has shown it won't play by the rules on any issue, seeking "domination" rather than "cooperation."

Blinken did add Monday that "when any country, China or otherwise, takes actions that challenge or undermine or seek to erode that rules-based order and not make good on the commitments that they’ve made to that order, we will stand up and defend the order."

China's intent to dominate, the 2017 NSS stated, requires the United States "to rethink the policies of the past two decades — policies based on the assumption that engagement with rivals and their inclusion in international institutions and global commerce would turn them into benign actors and trustworthy partners."

"For the most part, this premise turned out to be false," the strategy paper said.

After Biden was elected in November, an influential member of the Communist Party said in a lecture in Beijing that with Biden in the White House, China's sway over top influencers in the U.S. would return after an absence during the Trump administration, WND reported.

In the Nov. 28 lecture, which was captured on video, Di Dongsheng of Renmin University in Beijing cited, among other things, the Chinese business deals by Joe Biden's son Hunter as he explained why a Biden administration will restore the communist regime's influence on its "old friends" on Wall Street and inside the Beltway after it was throttled by President Trump.

"Now with Biden winning the election, the traditional elites, political elites, the establishment, they have a very close relationship with the Wall Street," he said.

Di referenced Hunter Biden's many business deals in countries, including China, where his vice president father directed U.S. policy. And he indicated they are of value in Beijing's relationship with Biden.

"You all heard that Trump said Biden's son has securities companies all over the world. But who helped Biden's son build his global companies?" Di asked.

"There are indeed buy-and-sell transactions involved in here, so I think at this particular time, [with Biden winning the election], it is of strategic and tactical value for us to show goodwill to him."

Later in the U.S.-U.K. news conference Monday, Blinken noted that the two countries "recently took measures to prevent British and American businesses from inadvertently supporting forced labor in Xinjiang and elsewhere in China."

"We'll continue our robust cooperation to address the atrocities in Xinjiang, a crackdown on pro-democracy activists and politicians in Hong Kong – which breaches China’s international commitments – and the repression of media freedom across China and in other parts of the world," he said.

Blinken made the same statement in a "60 Minutes" interview that aired Monday regarding the administration's intent not to contain China.

“I want to be very clear about something,” says Secretary of State Antony Blinken. “Our purpose is not to contain China, to hold it back, to keep it down. It is to uphold this rules-based order that China is posing a challenge to.” https://t.co/og55Ozf20D pic.twitter.com/r5CNDrgb0J

WND reported Sen. John Barrasso of Wyoming warned this week that China is playing Biden and his administration for fools, pretending it's a developing country while stealing technology, using forced labor and manipulating markets to its advantage.

U.S. officials such as climate envoy John Kerry act as if the communist regime is willing to cooperate, but Beijing's ultimate aim is domination, Barrasso wrote in a commentary for USA Today.