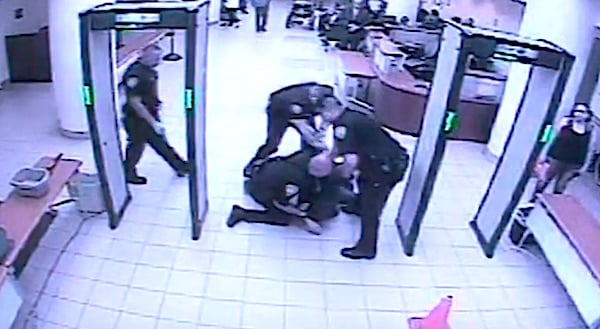 José Oliva was slammed to the ground by federal police officers. (Video screenshot)

A U.S. veteran who was beaten up by federal police while he was on his way to a dental appointment is asking the U.S. Supreme Court to intervene in his fight, after a lower court ruled by U.S. government workers who assaulted him won't be held to account.

According to officials with the Institute for Justice, the appeal is being presented in the case involve Jose Oliva.

The 70-year-old veteran "was assaulted by federal police in a VA hospital" while he was en route to an appointment in the building, the IJ reported.

"More than five years ago, Vietnam veteran José Oliva was headed into a dental appointment at a Veterans Affairs hospital in El Paso when three VA police officers wrenched his arm behind his back, choked him, and slammed him to the ground, causing damage that required surgery. What sparked the assault? José had told one of the officers his ID was in the X-ray bin instead of placing his license directly in the officer's hands," the IJ documented.

The IJ reported the video shows Oliva did nothing to provoke the officers, and "with 25 years of federal law enforcement experience under his belt, José knew better than to resist."

"If the decision is allowed to stand, citizens under the Fifth Circuit's jurisdiction—Texas, Mississippi, and Louisiana—have no claim for relief, while federal officials in other states are held accountable to the Constitution's demands, and that's simply unsustainable," said IJ attorney Alexa Gervasi.

Oliva had won in the trial court, where the judgment was that the officers violated his Fourth Amendment right against excessive force.

The 5th U.S. Circuit Court of Appeals, however, said Oliva could not sue the officers because they worked for the federal—rather than state or local—government and, therefore, were immune from suit.

"The Supreme Court has repeatedly held that federal officials can be held personally liable for executing unreasonable searches and searches," explained IJ Attorney Patrick Jaicomo. "If that is no longer the law, only the Supreme Court, not the Fifth Circuit, must say so."

The Supreme Court, presented with the request to review the results, already has asked the officers for a response.

The 5th Circuit, in fact, has used its own precedent in another case already, ruling that a Texas resident "could not file suit against a federal officer who attempted to smash the window of his car while wielding a gun and yelling that he would 'put a bullet through his f—ing skull,'" the IJ reported.

Judge Don R. Willett, in that case, said he was forced to follow precedent, but lamented the "Constitution-free zone" that court created.

Importantly, the 5th Circuit decision conflicts with what other courts have determined, and that conflict between regions is often what the Supreme Court uses to decide to take up a case. The defendants include Veterans Affairs officers Mario Nivar, Hector Barahona and Mario Garcia.

The petition explains Oliva approached the security checkpoint and placed his belongings in an inspection bin. Nivar then demanded Oliva's identification, and Oliva explained it was in the bin.

"Nivar, inexplicably agitated, came around the security checkpoint and approached Oliva with handcuffs drawn. Nivar then instructed Oliva to walk through the metal detector, at which point Barahona grabbed Oliva and Nivar put him in a chokehold. Before slamming Oliva to the ground, the officers wrenched his arm behind his back so violently that it made 'a loud popping sound.'"