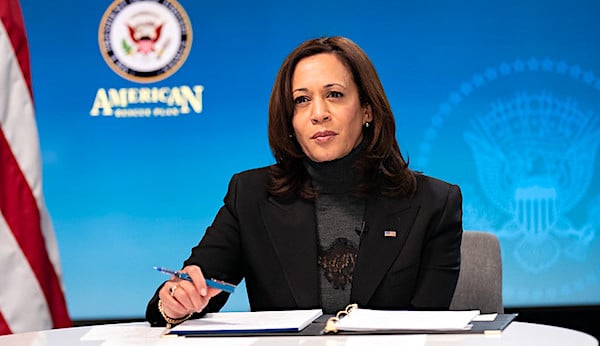 Kamala Harris herself keeps track of reporters she doesn't like, or who she thinks may not give her perspective its due emphasis, according to a new report.

The profile of the vice president that appeared in Atlanta confirmed, "Harris herself tracks political players and reporters whom she thinks don't fully understand her or appreciate her life experience."

"She particularly doesn't like the word cautious, and aides look out for synonyms too. Careful, guarded, and hesitant don't do over well," the report said. "But she continues to retreat behind talking points and platitudes in public, and declines many interview requests and opportunities to speak for herself…"

"Trying to get her to take a few questions after events is treated as an act of impish aggression," the report said.

At PJMedia came the comment, "When Joe Biden said during the campaign that he would choose a woman of color to be his running mate, he immediately narrowed the list of candidates to a handful. He got stuck with Harris largely for two reasons: her radicalism could be easily masked and she was the most successful woman of color who had held office."

PJMedia continued, "Harris was once seen as a fierce advocate for law and order and angered minority groups for backing policies they hated. To Joe Biden’s mind, that made her a 'moderate.' Whatever 'moderate' policies she may have backed in the past, she now fully embraces Biden's radical agenda."

"That she keeps an enemies list isn't surprising. Many politicians who lack the thick skin necessary to compete at the national level keep them. It's what they do with the list that matters if they ever achieve power," the report said.

The Washington Free Beacon explained that Harris dislikes antonyms, too.

"During the 2020 campaign, journalists and other libs were sounding the alarm about the word 'ambitious.' This was especially true following reports that some aides to then-candidate Joe Biden thought Harris was too ambitious to be his running mate; Biden did 'not want to be outshone,'" the Free Beacon reported.

"On that subject, the Atlantic profile does not inspire confidence in Harris's ability to realize her presidential ambition. Biden's death might be the only thing that could propel her to the White House, given her underwhelming political abilities. She already tried running for president in 2020, and her campaign flamed out before the Iowa caucus," the report said.

"In many ways, Harris is merely a non-white version of Hillary Clinton. Both women are possessed by ruthless ambition, yet lack the necessary skills to succeed in politics at the national level. They are most comfortable when regurgitating talking points and platitudes. Objectively speaking, they share a knack for unsettling laughter and launched their political careers by dating powerful men," the report said.

"Harris's obsession with keeping track of the politicians and reporters who 'don't fully understand her or appreciate her life experience' might seem strange, but it's nothing new. Hillary did the same thing but never got a chance to exact her revenge."