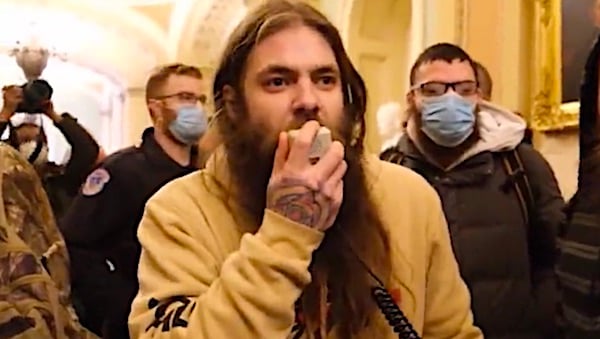 Capitol Police stand with protesters during the riot at the U.S. Capitol on Wednesday, Jan. 6, 2021. (Video screenshot)

There's no doubt some of the rioters at the U.S. Capitol on Jan. 6 were violent, doing vandalism to the nation's seat of government.

In fact, some actually broke windows or doors to get in.

But some had permission to enter.

See the documentation in this video:

According to a report at American Greatness, the video shows "United States Capitol Police officers speaking with several January 6 protestors – including Jacob Chansley, the so-called 'Q shaman' – inside the Capitol that afternoon."

One of the officers was identified as Keith Robishaw, who appears to tell the group that they have to behave … "We're not against …. You need to show us … no attacking, no assault, remain calm."

Chansley, who then has a microphone, says, "This has to be peaceful. We have the right to peacefully assemble."

President Trump, at his rally earlier in the day, had surged his supporters to protest "peacefully."

Explained American Greatness: "The video directly contradicts what government prosecutors allege in a complaint filed January 8 against Chansley: 'Robishaw and other officers calmed the protestors somewhat and directed them to leave the area from the same way they had entered. Chansley approached Officer Robishaw and screamed, among other things, that this was their house, and that they were there to take the Capitol, and to get congressional leaders.'"

The report said Chanlsey later was seen going into the Senate chambers, and leading several protesters in prayer.

Chansley is facing charges of trespassing and disorderly conduct.

American Greatness said it got the video from RMG News, and it reportedly is part of a longer video that hasn't been released yet.

The Gateway Pundit said, based on the video, "police invited several protesters into the U.S. Capitol that day. Several of these same protesters were later charged by overzealous prosecutors and smeared by the press."