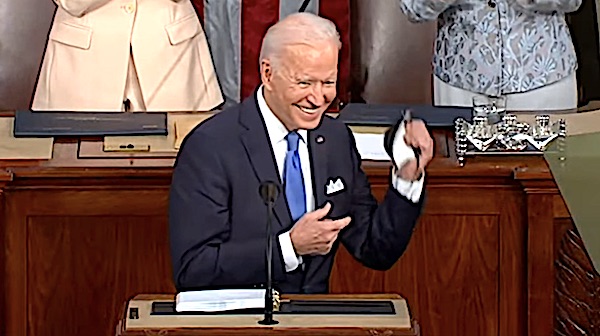 President Joe Biden laughs as he removes his face mask before his address to Congress on Wednesday, April 28, 2021. (Video screenshot)

President Biden is known for his verbal gaffes.

There was his recollection, for example, that when the stock market crashed, Franklin D. Roosevelt "got on the television" and talked about it. But it was Herbert Hoover who was president when the market crashed.

So word that the White House doesn't want Biden to respond to impromptu questions should surprise no one, Fox News reported.

Jen Psaki, the White House press secretary, said in a CNN interview it's "not something we recommend."

She added that many times she tells Biden not to take questions.

"But he's going to do what he wants to do because he's the president of the United States," she said.

Psaki also said press conferences distract Biden from doing his work, and "he would have to answer questions about certain topics."

This week, Biden said Americans making under $400,000 will "not pay a single penny in taxes."

The Western Journal at one point wondered what he meant by "truinnerashuvaduprezure."

He's also referred to the border between Venezuela and Bolivia, which doesn't exist.

He's repeatedly announced it's "President Harris." And he forgot not only his defense secretary's name, he forgot the name of his department.

As vice president, he said: "A man I'm proud to call my friend. A man who will be the next president of the Untied States … Barack America!"

Then there was his "three-letter word: Jobs. J-O-B-S."

His budget priorities were clear early on: "Now, people when I say that look at me and say 'What are you talking about, Joe? You're telling me we have to go spend money to keep from going bankrupt?' The answer is yes, that's what I'm telling you."

And his famous, "Folks, I can tell you I've known eight presidents, three of them intimately."