Prior to being shot in the head this week by four brothers in a melee at a wild party, Sasha Johnson, of the British chapter of Black Lives Matter, had big plans for whites.

Johnson had been "calling for a 'racial offenders register' that would see those guilty of 'microaggressions' banned from living in multicultural communities and prevented from working in certain industries."

"If you live in a majority-colored neighborhood you shouldn't reside there because you're a risk to those people – just like if a sex offender lived next to a school he would be a risk to those children," she fulminated.

Johnson's call for a "racial offenders register" for whites is a perfectly pragmatic application of the Critical Race Theory rot.

And while Critical Race Theory (CRT) was made-in-America – it has, like many a destructive American creed, been energetically exported around the world. British agitators are certainly improving upon the plans hatched for whites by their brothers-in-arms stateside.

To wit, Johnson had once pinned a tweet to her profile that read, "The white man will not be our equal, but our slave. History is changing. No justice, no peace #BLM." 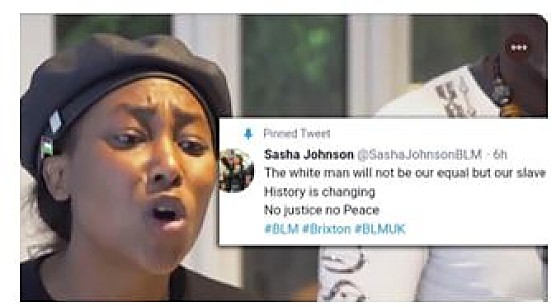 Believe Johnson and her ilk, for they are dead serious – and deadly.

Stateside, there have been some gains in working to outlaw the CRT poison percolating throughout American schools. Tennessee has led the way. Other states have introduced measures to ban or curb anti-white propagandizing by the nation's eager pedagogues.

Alas, the intellectual means of production remain firmly under the control of progressives. As part of the lucrative "racial-industrial-complex" (a Jack Kerwick coinage), Critical Race Theory enjoys muscular advocates.

Its adversaries, however, are weak and flaccid.

I've watched scores of noisemakers on Fox News "argue" against the Critical Race Theory agitprop in education. There's nothing but humbug from the channel's holy men and women. Their arguments against the CRT scourge are characterized by a white-out of whites.

Nobody will utter the words "anti-white," or articulate the "anti-white" essence of Critical Race Theory. CRT is always euphemized as things other than a hatred of whites and a resolve to blacken them. Always.

Weatherize the kids against … anti-whiteness

Not one of Critical Race Theory's conscientious objectors has said, "Whites. White kids": The true victims of the critical race miseducation are white kids, as they are the sole repository of hate and aggression in this critical-race blitzkrieg.

During the 2020 collapse of the electrical grid in Texas, we spoke of a grid that had not been weatherized nor winterized in anticipation of a harsh winter.

Wake up. Weatherize your kids against this anti-white hatred.

Start with ending the socialism escapism, for once and for all. Quit intoning like automatons that Critical Race Theory is about socialism, or Marxism. CRT is about and against whites.

In particular, unlike Critical Race Theory, Marxism offers a class-based analysis – it fingers social class as the primary source of conflict in society.

Critical Race Theory, conversely, focuses exclusively on race as the source of all oppression. Not on any race, mind you, but on the white race, or on "white supremacy."

Honest demons that they are, Critical Race Theory sophisticates generally reject the term racism in favor of "white supremacy as a conceptual framework for understanding race-based oppression," as Charles W. Mills, a CRT "scholar," readily concedes.

It is conservatives who cling to the comfortable "racism" generality to describe the thrust of Critical Race Theory. They're the only dazed and confused sorts to bewail CRT's un-American, diffuse, generic racism (the folks at Prager U, for example).

Strictly speaking, Critical Race Theory is not even traditionally racist; it's exclusively anti-white. It is pro all races other than white.

Unlike their feeble conservative adversaries, critical race theorists admit as much. These odious individuals use "white supremacy" to describe white existence. Irrespective of lives well-lived, to the Critical Race critters, whites are on the wrong side of creation.

As opposed to Marxists, then, critical race theorists identify race, the white race specifically, as the "primary contradiction in society."

Socialism is most certainly not central in the BLM list of values; socialism hardly rates a mention in the larger scheme of priming whites for dhimmitude – reeducating, intimidating and subjugating whites qua whites.

That truth, very plainly, is the albino elephant in the room.

Critical Race Theory's central project is to make whites accept dhimmitude, not socialism. (If the practitioners of anti-whiteness, who already practice capitalism as consumers and producers in a market economy, were converted to theoretical capitalism – would their anti-whiteness dissipate? Naturally not.)

If you imagined dhimmitude means life as a second-class citizen – you were dead wrong.

"Dhimmitude," according to Jihad Watch, "is the Islamic manifestation of the barbaric practice of extracting benefit or pleasure from someone whose life is already forfeit."

If anything, for its failure to finger whites for all the ills of society, Marxism is viewed as incompatible with Critical Race Theory by CRT's leading sophisticates, as observed by a critic, Marxist scholar Mike Cole. ("Critical Race Theory and Education: A Marxist Response.")

It's as simple as all that: For conflict in society, Marxism fingers social class; CRT saddles whites. Deal with it! Denial is a deadly defense mechanism!

On video: A companion to this column is Ilana Mercer's YouTube discussion with David Vance: "Whiteout For Whites: The BLM Monomania."