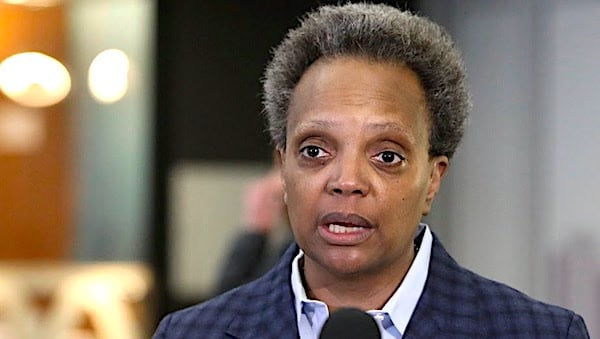 The Father's Day weekend in Chicago was sadly typical, with at least 54 people shot, eight of them fatally.

Among the fatalities was a 24-year-old father-of-two, Gyovanny Arzuaga. He and his girlfriend, Yasmin Perez, were ambushed in their car Saturday night by three men in the city's west-side Humboldt Park neighborhood. Arzuaga, with a gunshot to wound to the head, was pronounced dead at a hospital. Perez, who was shot in the neck, is in critical condition.

A police spokeswoman said the car crashed before the shooting and a crowd surrounded the couple. Perez and Arzuaga were ambushed by three men.

A purported surveillance video of the horrific scene that is circulating on social media shows shows the couple being pulled out or falling out of a car with a Puerto Rican flag. A GoFundMe to cover the cost of Arzuaga's funeral said he and Perez were celebrating at the Puerto Rican People's Day Parade when they were shot.

This happened in Humboldt Park Chicago last night. Couple was pulled out of their car and shot. He died, she is in critical condition.

At least 21 people were shot in Chicago overnight, with three people having died from their injuries. pic.twitter.com/5wtmWGOIoq

Newsweek noted that Chicago Mayor Lori Lightfoot hasn't addressed the most-recent weekend of shootings but casually lumped her city into a mix of others with "mass shootings."

"Unfortunately, Chicago is not unique," Lightfoot said. "We are part of a club of cities to which no one wants to belong, cities with mass shootings."

Earlier this month, she reacted to a Chicago Sun-Times report that children are dying from gun violence in Chicago at a rate three times higher than last year.

"I don’t need a Sun-Times article to tell me that," Lightfoot snapped. "I see those numbers every day."

By June 8, 10 children ages 15 or younger had been shot to death in Chicago, compared to three at the same time last year. And it was more than the number of kids gunned down during all of 2019.

Lightfoot campaigned on a promise to reduce violence. She has blamed the increase in violence on the pandemic, lax gun laws in nearby states and a dysfunctional criminal justice system.

But amid the anti-police movement prompted by the death of George Floyd one year ago, Chicago's police department is among many across the country experiencing a wave of retirements and departures, and struggling to find replacements. At the same time, officers in high-crime neighborhoods are taking a less aggressive approach to policing, a phenomenon dubbed the "Minneapolis Effect." In the weeks following Floyd's death in Minneapolis on Memorial Day, for example, homicides rose 182% in Chicago, 100% in Minneapolis, 200% in Seattle and 240% in Atlanta.

"My heart is destroyed, that was my best friend, my brother," said Arzuaga's brother in a phone interview Sunday night with Chicago's FOX 32 News.

The Chicago Sun Times quoted Jae Pacheco saying his friend, Arzuaga, was "just there to have a good time and go back home."

Pancheo remembered him as "such an amazing friend."