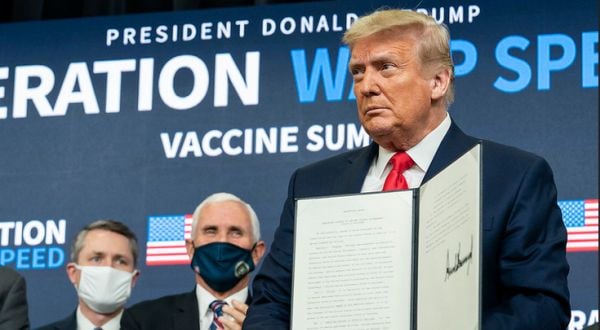 President Donald J. Trump, joined by Vice President Mike Pence and senior White House staff, displays his signature after signing an Executive Order ensuring that the American people have priority access to COVID-19 vaccines developed in the U.S. or procured by the U.S. Government, at the Operation Warp Speed Vaccine Summit Tuesday, Dec. 8, 2020, in the South Court Auditorium at the Eisenhower Executive Office Building at the White House. (Official White House Photo by Shealah Craighead)

Joe Biden's boasts about how successful his campaign against COVID-19 has been are lacking just one detail, according to a new analysis.

It's that he followed the pathway established by President Trump's Operation Warp Speech very closely.

"In short, the current COVID-19 vaccine delivery system in the U.S. appears to rely heavily on the operational models established by OWS for public-private partnerships and jurisdiction-led vaccine efforts, with the new federal programs providing additional contributions on the margin. As such, it is not surprising that the current trajectory of administered vaccines also matches the outlined goals and projections of OWS," said the new analysis.

"Despite White House chest-thumping and media praise for his plan to have enough vaccinations for all Americans by the end of last month, President Joe Biden’s goal was just a day better than former President Donald Trump’s plan and has followed the former administration’s script nearly exactly," Bedard reported.

"Trump, Kellogg told Secrets, 'knew he had a serious issue going on, but he didn't want to project panic or concern. You want to project confidence going forward, and he did that,'" the report said.

It estimated OWS "save[d] $2.4 trillion from the costs of typical vaccine development and got shots into arms by Jan. 11, just one year after the World Health Organization identified the disease originated in China."

Kellogg wrote, "OWS shattered the status quo. Its impact can only be fully understood when viewed in the context of where the country and the medical community were in terms of vaccine development and pandemic planning when COVID-19 struck."

"The analysis of Operation Warp Speed did note that the Biden administration has not continued the close cooperation with states implemented by Pence and has only changed the goal of full vaccination of the nation by one day," Bedard reported.

"The Biden administration has largely carried on many of the operational components of OWS, including nearly the same vaccine rollout plan with a target of all adults having access to the vaccine by the end of May -- a one day difference from the OWS goal of making 300 million doses available by June 1, 2021," wrote Kellogg and two doctors, Jacob Olidort and Heidi Overton.

Bedard reported because it worked, Kellogg said that Operation Warp Speed should be the model for future national campaigns, "one that combined a whole of government approach with private industry to speed solutions."

Biden at one point publicly stated that there were no vaccines available when he took office, when in fact they were, and were being administered at the rate of about a million shots a day already.