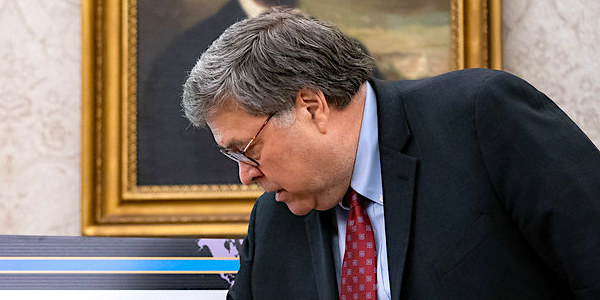 Former U.S. Attorney General Bill Barr, long known for his adherence to the U.S. Constitution, is warning that American public schools are engaged in "a broadside attack on the very idea of natural law."

Joy Pullman, an executive editor at the Federalist and author of "Classic Books for Young Children," reported that it was in a recent speech he said, "The greatest threat to religious liberty in America today … [is] the increasingly militant and extreme secular-progressive climate of our state-run education system."

Barr was speaking at a event for the Alliance Defending Freedom, which assembled an argument that a half-century of Supreme Court decisions, added to leftist gains in American institutions, have pushed schools so far they now are "a government-established preference for the atheist religion."

The report explained he said, "The heavy-handed enforcement of secular-progressive orthodoxy through government-run schools is totally incompatible with traditional Christianity and other major religious traditions in our country. In light of this development, we must confront the reality that it may no longer be fair, practical, or even constitutional to provide publicly-funded education solely through the vehicle of state-operated schools."

Not only is religion not kept out of schools, they now teach specific religious and political agendas that openly undermine Christianity, he said.

The report noted a statement from sociologist Lyman Stone in 2020 on this topic, "[Ex]pansions in government service provision and especially increasingly secularized government control of education… can account for virtually the entire increase in secularization around the developed world."

The report noted Barr described how public schools in the U.S., which used to have an explicitly Christian focus, have now become an antagonist to faith in America.

He said from the foundings of education where families specifically wanted Christian teachings, to the leftist agenda to remove those teachings, to today's "third phase," which is secular teachings to the exclusion of all else, the priorities have been reversed.

"It is hard to teach that someone ought to behave in a certain way unless you can explain why," Barr said.

The Federalist reported his warning, "What is taking shape is a full-blown—may I say ‘systemic’—subversion of the religious worldview. While the secularist may view each lesson, such as transsexualism—as dealing with a discrete subject, those lessons embody broader ideas that are fundamentally incompatible with the religious viewpoint. Telling school children that they get to choose their gender—not just male or female, but anything else—and that no one else has anything to say about it—does not just contradict particular religious teachings on gender and the authority of parents; it is a broadside attack on the very idea of natural law, which is integral to the moral doctrines of a number of religious denominations."

He charged that not only are schools subverting parental authority and their teachings, the schools are unconstitutionally mandating a preferred religion – "resting on materialist metaphysics."

"It has its notion of original sin, salvation, penance, its clergy, its dogmas, its sensitivity to any whiff of heresy, even its burning at the stake," he said.