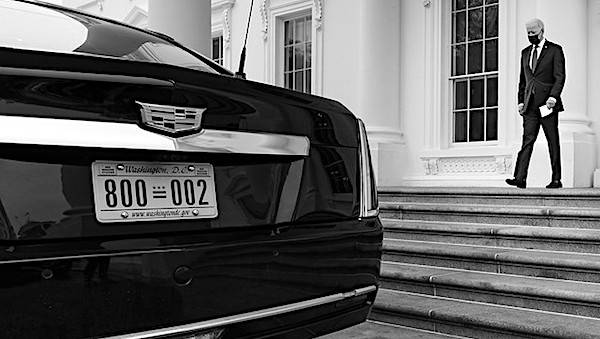 Given the Internal Revenue Service’s history of politicization, conservatives are expressing concern about the potential for abuse from President Joe Biden’s proposed doubling of the number of IRS agents.

A massive information leak of private tax data has only exacerbated those concerns.

Ahead of IRS Commissioner Charles Rettig’s testimony before a Senate committee Tuesday, ProPublica, an investigative journalism nonprofit, published private tax data of wealthy individuals, saying it “obtained the information from an anonymous source.”

Biden’s $6 trillion fiscal year 2022 budget proposal includes $80 billion for the IRS over the next decade to cover the cost of an additional 87,000 new IRS agents. The stated reason is to help an under-resourced agency pursue tax cheats. That would empower an agency just a few years after it was embroiled in a scandal for alleged politicized targeting.

“It will take time to overcome the challenges of the past without adequate, consistent, multiyear funding. The agency will continue to struggle to replace more than 50,000 employees expected to be lost through attrition over the next six years, expand and train our workforce, and support implementation of our multiyear, integrated, business organization plan,” Rettig told the Senate Finance Committee on Tuesday.

A string of audits and congressional investigations asserted the IRS improperly targeted tea party and other conservative groups during the 2010 and 2012 election cycles regarding applications for tax-exempt status. The IRS ultimately settled litigation with the conservative groups.

Even before that, seemingly politicized leaks were a problem.

Politicized IRS leaks are not new, noted Grover Norquist, president of Americans for Tax Reform, a taxpayer advocacy group. He said that while much attention has gone to former President Barack Obama’s administration’s targeting the tea party, donors to conservative organizations were also targeted during the Bill Clinton presidency.

“We know in the Biden-Obama administration and in the Clinton administration, personnel in the IRS looked at what individuals gave money to and leaked that information,” Norquist told The Daily Signal.

The ProPublica article seemed to push the policy line of the Biden administration that the wealthiest individuals aren’t paying enough in taxes.

“What this data reveals is that the country’s wealthiest, who profited immensely during the pandemic, have not been paying their fair share,” Wyden said. “I’ll have a proposal to change that.”

But this data leak raises significant questions about whether the tax collection agency should have more power, said Sen. Mike Crapo, R-Idaho, the ranking member of the Finance Committee.

“We are seeing information today that appears to be 15 years’ worth of leaked confidential individual tax data from the IRS,” Crapo said, adding:

We don’t know the details of what happened here or not. But this information here today is very relevant, in my opinion, to some of the proposals the administration has on the table to expand the IRS’ access to data.

Cornyn’s Small Business Taxpayer Bill of Rights Act of 2021 would prohibit conversations between IRS employees and the IRS Independent Office of Appeals; would reduce the cost of compliance for small businesses; would make it a firing offense to disproportionately scrutinize tax-exempt applications based on ideology, while also strengthening inspector general oversight; and would compensate taxpayers for IRS abuses.

“This bill takes concrete steps towards easing the burden the IRS places on job-creating small businesses so they can get back to what they do best—innovating and creating opportunity across America,” Cornyn told The Daily Signal in a statement.

Cornyn’s legislation would at least make it more difficult for the IRS to abuse its power, Norquist said.

The Cornyn bill would make that [disclosures of donations to political groups] illegal. It wouldn’t make it impossible, but it would make it difficult to happen again.

Norquist noted the 1958 Supreme Court ruling in the case of NAACP v. Alabama that donations can remain private in order to protect people from retribution.

“This is modeled after the Supreme Court’s decision in the NAACP v. Alabama case,” Norquist said. “It’s very much in keeping with that American legal precedent that you do not want the world to see who you are donating money to.”

For its part, the Biden administration contends the IRS is underresourced in its enforcement against tax cheats. Further, the administration asserts in a Treasury Department report that new funding would “make up for lost ground” after operating on a flat or reduced budget for the past decade.

“The first step in the President’s tax administration efforts is a sustained, multiyear commitment to rebuilding the IRS, including nearly $80 billion in additional resources over the next decade,” the Treasury Department report says. “The IRS would grow manageably (no more than around 10% annually), but also have certain funding in place to make investments with large fixed costs.”

Biden’s $80 billion funding boost over 10 years is part of a bigger push among Democrats in Congress who have supported allowing IRS funding increases to be on autopilot, skipping the regular appropriations process, said Matthew Dickerson, director of the Grover M. Hermann Center for the Federal Budget at The Heritage Foundation.

“It certainly seems like a big push by Democrats to increase the number of unionized bureaucrats at the IRS,” Dickerson told The Daily Signal in a phone interview. (The Daily Signal is the news outlet of The Heritage Foundation.)

Dickerson added: “There should be considerable concern if you are doubling the [number] of IRS agents. How well trained are these folks?”

The IRS scandal generated significant notoriety during the Obama administration.

In May 2013, the Treasury Department’s Inspector General for Tax Administration released a report asserting that in the 2010 and 2012 elections, the IRS “used inappropriate criteria that identified tea party and other organizations applying for tax-exempt status based upon their policy positions.” That occurred when Lois Lerner ran the exempt-organizations unit. (Lerner was placed on paid administrative leave, and later in 2013, resigned and retired.)

That prompted investigations by the House Oversight and Reform Committee that asserted in 2014 top IRS officials knew of the targeting and decided against informing Congress.

In 2015, the Senate Finance Committee released findings that Lerner’s personal and political views played a role. The report said: “Lerner orchestrated a process that subjected these applicants to multiple levels of review by numerous components within the IRS, thereby ensuring that they would suffer long delays and be required to answer burdensome and unnecessary questions.”

Still another report, this one in 2016 from the Government Accountability Office, stated the IRS might still be unfairly targeting nonprofits “based on an organization’s religious, educational, political, or other views.”

Nevertheless, Justice Department prosecutor Barbara Bosserman—who had donated $6,750 to Obama’s campaigns and to the Democratic National Committee from 2004 to 2012—investigated the matter and declined to press charges.

The IRS ultimately settled lawsuits with several tea party and other conservative groups in 2017 and 2018.

In 2016, Congress first approved a provision to prevent the IRS from doing anything to target tax-exempt organizations or groups applying for tax-exempt status. That provision has been adopted in subsequent budget bills, including for fiscal year 2021, which ends in October.

“It is currently illegal under federal law for any president, including President Biden, to pursue any regulation or guidance that would have the IRS targeting 501(c)(4) organizations, such as occurred under the IRS, beginning in 2010 going after tea party and other conservative groups,” Robert Romano, vice president of public policy at Americans for Limited Government, a conservative advocacy group, told The Daily Signal.

With Democrats in control of the House, Senate, and White House, it will be up to congressional Republicans to protect this defund if and when it comes up for consideration in this year’s continuing resolution, the next omnibus spending bill, or any other budgetary legislation that Democrats might seek to overturn it in.

Notably, congressional Democrats would essentially reverse that under an election overhaul bill, which would also federalize control of elections, said Hans von Spakovsky, senior legal fellow with The Heritage Foundation.

The bill, HR 1, the so-called For the People Act—which would nullify most state voter ID laws and expand ballot harvesting, among many other things—would also allow the IRS to investigate political and policy persuasions of any nonprofit organization and its members before granting tax-exempt status.

“A provision in HR 1 would allow future behavior like what we saw from Lois Lerner, and the Biden administration wants to give them the funding to do it,” von Spakovsky told The Daily Signal. “ … The administration seems to want to use the tax authority to target who they would consider political enemies.”