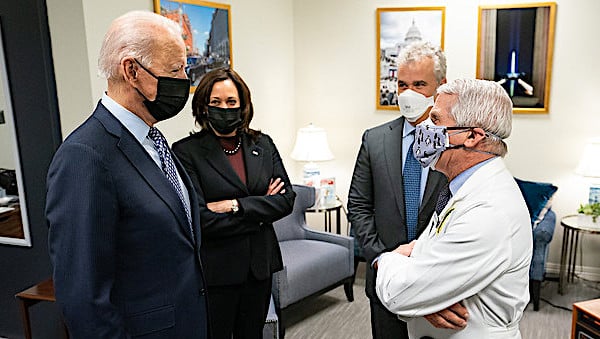 The capital city has been a sleepy place this week as a lazy, relatively normal summer seems at hand. President Biden is away celebrating the birthday of the first lady and Congress is out on recess. Meanwhile, the haggling over infrastructure is detailed and slow.

The White House would very much like things to stay that way.

So, when asked about the recently released controversial emails of Dr. Anthony Fauci -- detailing what the coronavirus point man was doing and saying in the early days of the pandemic -- White House Press Secretary Jen Psaki reiterated that the doctor remains Biden’s man. And as far as his past words and actions are concerned, the White House seemed to say, it’s best to leave well enough alone.

“It is obviously not that advantageous for me to relitigate the substance of emails from 17 months ago,” Psaki said when asked about the issue for the first time on Thursday. Biden has ordered a 90-day review “to get to the bottoms of the origins” of the pandemic, she continued, adding that the administration would talk once that three-month survey is complete.

Republicans are furious. They would like a word with Fauci. Under oath.

House GOP Whip Steve Scalise, the top Republican on the House Select Subcommittee on the COVID-19 Crisis, and Oversight Committee Ranking Member James Comer demanded Fauci be hauled up to the Hill. “The American people have a right to know,” the two wrote in a letter first obtained by Fox News, “what our government knew about the origins of the pandemic and when it was known.”

That furor was slow to build when the emails were released Tuesday following a Freedom of Information Act request by BuzzFeed. Republican staffers had dug through the more than 3,000-pages of email by Wednesday night, though, and their bosses dashed off fiery statements from vacation.

They are angry that Fauci questioned the efficacy of masks in private but insisted they were sacrosanct in public. "Masks are really for infected people to prevent them from spreading infection to people who are not infected rather than protecting uninfected people from acquiring infection," the doctor wrote in February 2020.

They are irate that Fauci traded emails with Biden science adviser Zeke Emanuel that March, saying in private that there “would be substantial immunity post infection” for someone who had recovered from the virus, but insisting in public that the opposite was true.

They are furious that Fauci scrambled in private to investigate the possibility that the virus accidentally leaked from a Chinese lab but then repeatedly dismissed that theory in public. They find it inexcusable, for instance, that the infectious disease doctor traded emails with an executive at EcoHealth Alliance, the global nonprofit that helped steer federal funds to the Wuhan Institute of Virology.

“The emails raise more questions than answers, including whether there was a coordinated effort amongst our nation’s highest ranking public health officials to discount credible information about the coronavirus and its possible origins,” Florida Sen. Marco Rubio told RealClearPolitics.  “What is clear is that certain officials like Fauci were trusted by the media even as they were less than forthcoming with the country.”

Sen. Tom Cotton went a step further, accusing the infectious disease specialist of coordinating “with one of the Wuhan Lab's funders to cover up the plausible notion that the virus could have come from inside the lab.” The Arkansas Republican who posited the lab-leak theory early on during the pandemic told RCP that Fauci “needs to stop playing games and answer questions about his role in funding the very lab that may have unleashed this pandemic on the world.”

All of this was too much for the man under the microscope, who recently announced he would be writing a book titled "Expect the Unexpected: Ten Lessons on Truth, Service, and the Way Forward.”

“That's nonsense," Fauci said when asked by CNN's John Berman about his correspondence with people involved in the Wuhan lab. "I don't even see how they get that from that email." He noted that the origins of the coronavirus are still uncertain and that a lab leak is possible -- a reversal of his earlier publicly stated position.

The doctor added in another Thursday interview, this one on MSNBC’s “Morning Joe,” that it was “obviously” in China’s best interest to find out where the virus came from, despite the fact that the Biden administration has “deep concerns” about that nation’s lack of transparency. He chided that an “accusatory” tone was counterproductive to working with the Chinese.

Those on the right have developed a deep skepticism of Fauci and what they consider blind subservience to his expertise, a phenomenon many believe led to not just bad policy but obscured the origins of the pandemic. Fox News host Tucker Carlson summed up that sentiment Wednesday, saying that the immunologist should be under “criminal investigation.” Sen. Rand Paul, who is a practicing physician himself and who has clashed with Fauci repeatedly, simply tweeted “told you" along with the hashtag #FireFauci.

Does Biden still have confidence in Fauci, RCP asked. Yes, Psaki said: “The president and the administration feel that Dr. Fauci has played an incredible role in getting the pandemic under control, being a voice to the public throughout the course of this pandemic.”

Has the president read any of the emails? RCP followed up. Psaki couldn’t say, but seemed to dismiss the question: “I’m not aware of him being briefed on the publicly reported emails.”