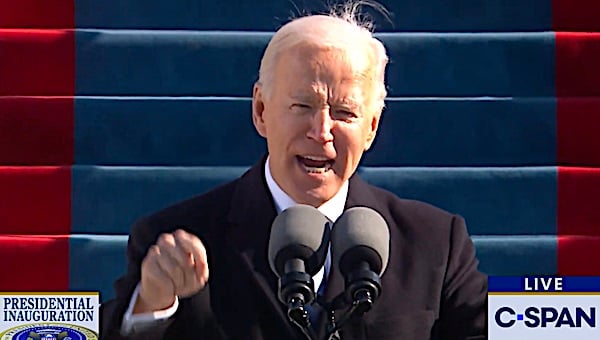 President Biden on Wednesday lost his cool and erupted in anger at a reporter's question shortly after he met behind closed doors with Russian President Vladimir Putin.

The question from CNN's Kaitlan Collins was over whether, or if, Biden was confident Putin would change his behavior based on Biden's meeting.

"What the hell? What do you do all the time?... If you don't understand that, you're in the wrong business," Biden said.

"The clip went viral in the moments after it happened, with some quipping that 'Biden needs to take anger management classes,'" the report explained.

Later, he apologized in an off-handed quip that he shouldn't have acted that way.

President Biden apologizes to CNN’s Kaitlan Collins before departing Geneva for his response to her question at the end of his news conference. pic.twitter.com/Z8S8DoXXdp

The National File noted that Biden, who repeatedly has commented about his multiple meetings with Putin over Biden's many years in Washington, including calling him a killer, was asked, "Why are you so confident [Putin] is going to change his behavior?"

"Biden swung around and glared at the reporter," the report said.

He then lashed out, with, "I’m not confident I’m going to change his behavior. What the hell? What do you do all the time? When did I say I was confident? I said, I said, what I said was, let’s get it straight, I said what will change their behavior if the [unintelligible] world reacts to to their behavior that diminishes their standing. I’m not confident of anything, I’m just stating the facts."

Collins noted that Putin, after meeting with Biden, had denied involvement in cyber attacks and downplayed human rights abuses. "So how does that account to a constructive meeting," she asked.

Biden said, "If you don’t understand that, you’re in the wrong business."

He then walked away.

Bob Unruh
Bob Unruh joined WND in 2006 after nearly three decades with the Associated Press, as well as several Upper Midwest newspapers, where he covered everything from legislative battles and sports to tornadoes and homicidal survivalists. He is also a photographer whose scenic work has been used commercially.
Financially 'stressed': Biden's inflation harming many workers' pay
One Democrat fiercely resisted Schiff in Trump impeachment, book says
Biden has absurd, vocal 'solution' to inflated gasoline prices
'The first undercover journalists to be criminally prosecuted' in state history
Biden's big lie? Committed 8 times in inaugural to 'unity'
See more...