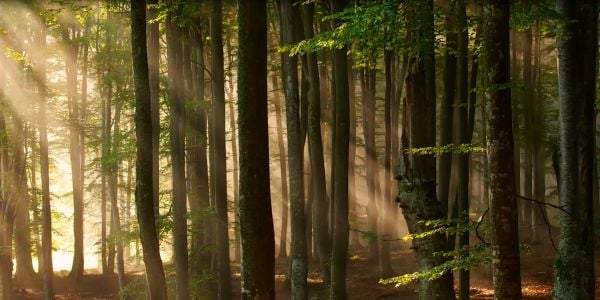 Stone-Manning testified that she sent an anonymous and threatening letter to the Forest Service in 1989 on behalf of John P. Blount, who she identified as her former roommate and a member of her circle of friends, court documents show. The letter warned that a local forest in Idaho set to be logged had been sabotaged with tree spikes, according to the documents.

Tree spiking, which The Washington Post and other news outlets have described as an “eco-terrorism” tactic, is a form of sabotage in which metal spikes are nailed into trees to make them unsafe to log. If gone unnoticed, tree spikes can cause serious injuries for workers.

A 23-year-old mill worker in California, for example, had his jaw cut in half in 1987 when his saw exploded upon striking an unnoticed tree spike, The Washington Post reported.

Stone-Manning told local media outlets at the time of the trial she waited until 1993 to inform federal authorities of her role in sending the letter because she was scared Blount would threaten her life. She also said she has always denounced tree spiking.

Should Biden's Bureau of Land Management nominee get immunity for her eco-sabotage?
2% (1 Votes)
98% (40 Votes)

If confirmed as Biden’s BLM director, Stone-Manning would oversee 245 million acres of public lands, equivalent to about 12% of the U.S. landmass.

Senate Energy & Natural Resources Committee Ranking Member Sen. John Barrasso told the DCNF that Stone-Manning’s involvement in the tree-spiking incident should disqualify her from serving in the position.

“Tracy Stone-Manning collaborated with eco-terrorists,” Barrasso said. “She worked with extreme environmental activists who spiked trees, threatening the lives and livelihoods of loggers.”

“While she was given immunity from prosecution to testify against her companions in court, her actions were disgraceful,” the Wyoming Republican told the DCNF.

The anonymous letter Stone-Manning said she sent on Blount’s behalf stated that “a total of five hundred pounds of spikes measuring 8 to 10 inches in length” were unloaded in a local forest to prevent an upcoming logging sale, court records show.

“The sales were marked so that no workers would be injured and so that you a------- know they are spiked,” the letter stated. “I would be more than willing to pay you a dollar for the sale, but you would have to find me first and that would be your WORST nightmare.”

Stone-Manning testified that she was “somewhat shocked” by the contents of the letter Blount asked her to send but decided to mail it to the Forest Service after thinking it over for a night, court records show.

“I wanted people to know those trees were spiked,” she testified. “I didn’t want anybody getting hurt as a result of trees being spiked.”

Stone-Manning testified that she retyped the letter word-for-word, but also said she removed profanity.

But before Stone-Manning sent the letter, she testified that she retyped it from a rented typewriter because she “didn’t want it on my personal computer.” She also began to explain “because my fingerprints,” before a defense attorney cut her off.

Stone-Manning told the Missourian in June 1993 that she retyped the letter “because my fingerprints were all over the original and I was scared.”

“What I really feel, though, is that I reported a crime, although anonymously,” she added.

The federal jury found Blount guilty of spiking trees. He was sentenced to 17 months in prison.

Stone-Manning has provided differing accounts to the media and lawmakers of her involvement in the case in the years since her testimony.

Stone-Manning informed the Senate Energy & Natural Resources Committee in writing in May that she has never been the target of any federal criminal investigation. However, she disclosed to the committee that she testified before a federal grand jury in 1989 as part of an investigation into an “alleged tree-spiking incident,” and later testified in a trial that resulted in the conviction of a “responsible individual” according to written testimony obtained by the DCNF.

Stone-Manning did not disclose to the Senate committee that, according to reporting at the time by the Missoulian, she told reporters she could have been charged with conspiracy in the matter had U.S. prosecutors not granted her immunity from prosecution in exchange for her testimony. She also didn’t disclose that, according to the Missoulian, prosecutors investigating the matter subpoenaed her in 1989 and required her to give handwriting and hair samples to a federal grand jury.

Stone-Manning told the Casper Star-Tribune in May 1993 that Blount had a shotgun in his possession and had threatened to kill anyone who spoke to authorities about the tree spiking. Stone-Manning said Blount left the state shortly after law enforcement officials launched their investigation in 1989.

Also in May 1993, Stone-Manning told the Missoulian newspaper that upon reading news of Blount’s arrest, she felt safe enough to inform federal authorities that she mailed the letter to the Forest Service on Blount’s behalf.

“Once he was in jail, I was safe,” she told the Missoulian. “It was time to come forward. It was my responsibility.”

The Missoulian also reported: “Stone-Manning said she could have been charged with conspiracy because she mailed the letter for Blount, were it not for her agreement with the U.S. attorney.”

The outlet reported that U.S. Attorney Maurice Ellsworth sent a letter to Stone-Manning’s lawyer stating she “will be granted use immunity for the statements which she makes to the degree that it may incriminate her.”

Stone-Manning offered a different version of events in 2013 after then-Montana Gov. Steve Bullock nominated her to serve as the director of the state’s Department of Environmental Quality.

The Missoulian reported in 2013 that Stone-Manning said Blount’s ex-girlfriend unsolicitedly contacted her in 1993 and said Blount was soon to be released from jail due to an unrelated domestic abuse matter. She told Stone-Manning that she wanted him to stay imprisoned and that Stone-Manning’s testimony in the tree spiking incident would keep him behind bars.

“She knew everything about the tree-spiking story and she knew if she told everything that could keep him in jail,” Stone-Manning said in 2013, according to the Missoulian. “She asked if I would testify, and I said yes, and he went to jail.”

Neither version of events presented by Stone-Manning align completely with the timeline presented in Breitsmater’s pre-trial memo.

Breitsmater wrote that Blount’s ex-girlfriend contacted a Forest Service agent in December 1992 and told the agent that Blount was responsible for the 1989 tree spiking incident. She also said that Stone-Manning was the individual who mailed the threatening letter, according to the memo.

WND News Services
These reports are produced by another news agency, and the editors of WND believe you'll find it of interest.
Dow falls 300, S&P 500 slips from record high after jobs data disappoints
Biden sex accuser: Psaki is lying to public about her allegations
2 more Olympians sprint for their lives, refuse to return home
Private companies added only half the jobs expected during July
Eerie video: 'Is anybody there? This is huge. I mean, humongous'
See more...