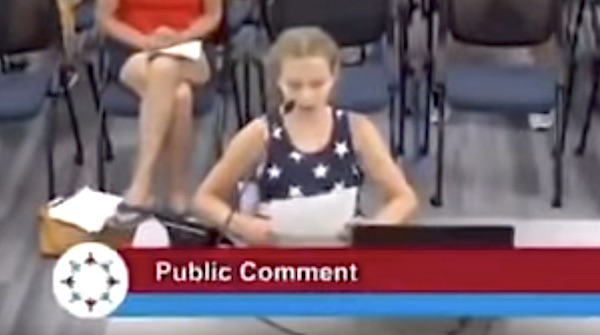 A 9-year-old girl addresses the Lakeville Area School Board meeting in Minnesota on June 8, 2021. (Video screenshot)

A 9-year-old girl was seen on video criticizing her school board for putting Black Lives Matter posters around her school, despite a ban on political posters.

The student, who said her name was Novalee, spoke at a Lakeville Area School Board meeting in Minnesota on June 8 where she said she saw signs about Black Lives Matter and poet Amanda Gorman on her teacher’s wall at Lakeview Elementary School. Novalee said these posters go against what the board said prior about having no politics in school.

Novalee said she asked her principal to take down the posters, but he refused. The principal allegedly told her that the school board members were the ones who made the posters.

She described the message of these posters as calling for the end of police, rioting, and burning buildings “while King Gov. (Tim) Walz just sits on his throne and watches.”

Novalee said the political message of these posters can’t be changed by reworking the color or font.

“I am nine years old and I know that,” Novalee said in reference to the meaning of the posters. “You expect to believe that you did not know what you were doing when you were making these posters? Come on, people!”

She then quoted a line about not judging someone by the color of their skin but their personality from Martin Luther King Jr.’s “I Have a Dream” speech.

“That dream has come true. I do not care or look at the color of skin. But you make me think of it,” she said.

A woman, who said she works at Eastview Elementary school, praised the board after the girl spoke before saying “Black Lives Matter” six times.

The principal and school board did not respond to an immediate request for comment from the Daily Caller News Foundation.

Numerous school board meetings across the country have seen parents and students complain over politics inside schools. Hundreds of parents criticized a Florida school board for its call to dismantle “structures rooted in white advantage” from its “equity statement” in May.

A school board candidate in Evanston, Illinois, slammed the city school district’s curriculum in April that teaches black kids they “can’t get ahead” due to white supremacy.

A California school board member launched a group to protest a college course in August 2017 that draws from the Black Lives Matter movement and analyzes some of the issues black men might face in education and schools.