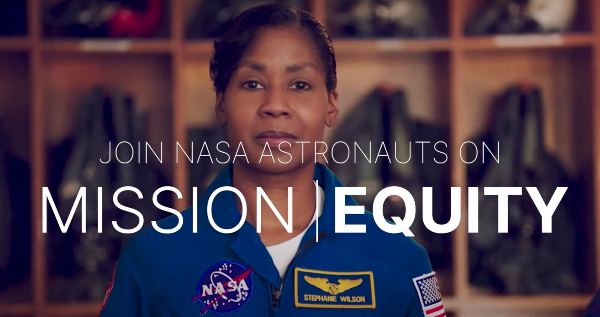 NASA has launched a new "equity" recruiting mission that opponents, who have dubbed it "critical space theory," are criticizing as a new form of discrimination that minimizes merit.

Former U.S. Space Force unit Lt. Col. Matthew Lohmeier argued in an interview with Fox News that NASA historically has been "a symbol of inclusion and equal opportunity" that allows anyone to "rise up based on your merit … and actually do very important things for the country."

"Do we really want to walk the road that will cause us to abandon Martin Luther King Jr.’s dream of having a colorless society? We’re starting once again to judge people by the color of their skin," he told Fox News' Tucker Carlson on Thursday night.

The NASA program, titled "Advancing Racial Equity and Support for Underserved Communities in NASA Programs, Contracts and Grants," was kicked off Tuesday with a video show staffers of a variety of racial backgrounds delivering the new inclusive message, the New York Post reported.

"At NASA, we’re on a mission of equity, launching opportunity … to reach those we’ve never reached before. … To shatter boundaries and break down barriers across America," they say.

The agency says it wants to reach "Black, Latino, and Indigenous and Native American persons, Asian Americans and Pacific Islanders and other persons of color" along with "lesbian, gay, bisexual, transgender, and queer (LGBTQ+) persons." In addition, it is seeking to recruit "members of religious minorities," people with disabilities and "persons otherwise adversely affected by persistent poverty or inequality."

NASA Administrator Bill Nelson said in a statement that he is leading "a 21st-century agency with 22nd-century goals."

"To be successful, it's critical that NASA takes a comprehensive approach to address the challenges to equity we see today," he said. "Because when NASA opens doors to talent previously left untapped, the universe is the limit."

The Post noted a Twitter user named Nicholas Jones called the mission "critical space theory," playing off the Marxist-based Critical Race Theory that is stirring controversy at school board meetings across the nation.

In 2010, the Obama administration tried to walk back NASA administrator Charles Bolden's statement that reaching out to the Muslim world was one of the agency's top priorities.

Bolden told Al-Jazeera television that President Obama had instructed him to engage in outreach with the Muslim world "to help them feel good about their historic contribution to science, math and engineering."

The White House later insisted Obama was saying that he wanted NASA to engage with the world’s best scientists, which included those from Muslim-majority countries.

But at a news conference, a reporter asked Obama spokesman Robert Gibbs why Bolden had made the comment.

"It's an excellent question, and I don't think -- that was not his task, and that’s not the task of NASA," Gibbs said.

Content created by the WND News Center is available for re-publication without charge to any eligible news publisher that can provide a large audience. For licensing opportunities of our original content, please contact [email protected]